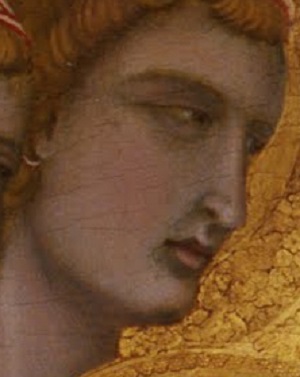 Pietro Lorenzetti (or Pietro Laurati; c. 1280 – 1348) was an Italian painter, active between c.1306 and 1345. Together with his younger brother Ambrogio, he introduced naturalism into Sienese art. In their artistry and experiments with three-dimensional and spatial arrangements, the brothers foreshadowed the art of the Renaissance.

Little is known of Lorenzetti's life other than he was (putatively) born in Siena in the late 13th century (c.1280/90), died there (possibly) in 1348 a victim of the first Black Death pandemic then devastating Europe, and had a younger brother, Ambrogio, also an artist. That the men were brothers was unknown to Vasari because he misread Pietro's surname on a painting in Pistoia's church of San Francesco as "Laurati". Thus the kinship between the artists was missed.

Pietro worked in Assisi, Florence, Pistoia, Cortona, and Siena, although the precise chronology is unknown. His work suggests the influence of Duccio (in whose studio he may have worked, possibly alongside Simone Martini), Giotto, and Giovanni Pisano.

According to Vasari, it was Pietro's frescoes that adorned the facade of Siena's Ospedale della Scala that first bought him to the attention of his contemporaries. Unfortunately, the frescoes – now believed to be the work of both Lorenzetti brothers – were destroyed in 1720 and subsequently whitewashed over.

Many of his religious works may still be seen in churches and museums in the Tuscan towns of Arezzo, Assisi, and Siena (e.g., his last documented work – the Nativity of the Virgin (c. 1335–1342) – is displayed in the Museo dell'Opera del Duomo).

Although Lorenzetti's integration of frame and painted architecture in the Nativity of the Virgin is usually thought to be unique, it is evident in the frescoes of Assisi some decades earlier. One probable conclusion can be made that he did not read Latin as there was documentation of a translator being paid in association with his work on The Birth of the Virgin.

His masterwork is a fresco decoration of the lower church of Basilica of San Francesco d'Assisi, where he painted a series of large scenes depicting the Crucifixion, Deposition from the Cross, and Entombment. The massed figures in these pieces display emotional interactions, unlike many prior depictions which appear to be iconic agglomerations, as if independent figures had been glued onto a surface, with no compelling relationship to one another. The narrative influence of Giotto's frescoes in the Bardi and Peruzzi Chapels in Santa Croce (Florence) and the Arena Chapel (Padua) can be seen in these and other works of the lower church. The Lorenzetti brothers and their contemporary competitor from Florence, Giotto, but also his followers Bernardo Daddi and Maso di Banco, seeded the Italian pictorial revolution that extracted figures from the gilded ether of Byzantine iconography into pictorial worlds of towns, land, and air. Sienese iconography, generally more mystical and fantastic than that of the more naturalistic Florentines, sometimes resembles a modern surrealist landscape.

The gilded three-story altarpiece, the Arezzo (or Arentine or Tarlati) Polyptych, was commissioned in 1320 by bishop Guido Tarlati for the Santa Maria della Pieve in Arezzo. At its centre is the Madonna (draped in a magnificent ermine-lined robe) and child, flanked by John the Evangelist, John the Baptist, Saint Matthew, and Arezzo's patron saint, Donatus (martyred in 361 CE). The rich colours, graceful lines, decorative detail, and supple figures (suggestive of Martini's influence), endow the piece with "a vivacity rare in contemporary Sienese art."