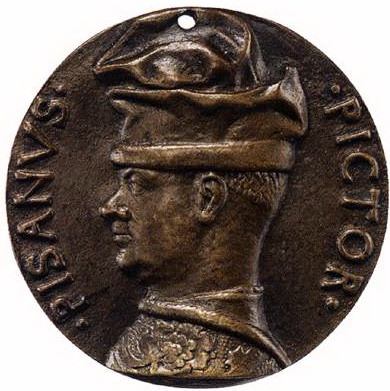 Pisanello (c. 1395 – c. 1455), known professionally as Antonio di Puccio Pisano or Antonio di Puccio da Cereto, also erroneously called Vittore Pisano by Giorgio Vasari, was one of the most distinguished painters of the early Italian Renaissance and Quattrocento. He was acclaimed by poets such as Guarino da Verona and praised by humanists of his time, who compared him to such illustrious names as Cimabue, Phidias and Praxiteles.

Pisanello is known for his resplendent frescoes in large murals, elegant portraits, small easel pictures, and many brilliant drawings. He is the most important commemorative portrait medallist in the first half of the 15th century, and he can claim to have originated this important genre.

He was employed by the Doge of Venice, the Pope in the Vatican and the courts of Verona, Ferrara, Mantua, Milan, Rimini, and by the King of Naples. He stood in high esteem in the Gonzaga and Este families.

Pisanello had many of his works wrongly ascribed to other artists such as Piero della Francesca, Albrecht Dürer and Leonardo da Vinci, to name a few. While most of his paintings have perished, a good many of his drawings and medals have survived.

Pisanello's life is somewhat shrouded in mystery. He was born between 1380 and 1395 and died between 1450 and 1455 (probably between 14 July and 8 October 1455). He was a native of Pisa but spent his early years in San Vigilio sul Lago in the territory of Verona. He was probably given his early training by a Veronese painter (perhaps Altichiero or Stefano da Verona) as his early style is in the tradition of Veronese painting.

Between 1415 and 1420, Pisanello was the assistant of the renowned painter and illuminator Gentile da Fabriano from whom he acquired his refined, delicate, detailed style. Pisanello also acquired from him a taste for precious materials and beautiful fabrics that can be found in his later paintings. The frescoes in the Doge's Palace at Venice, on which they worked together, have perished as well as the frescoes in the Basilica of St. John Lateran and the palaces of Mantua and Pavia.

In 1422, Pisanello was reported to be in Mantua in the service of young Ludovico Gonzaga, son of the Marchese of Mantua Gianfrancesco Gonzaga. He continued to work for the Gonzaga family till the 1440s.

Giorgio Vasari, an artist and biographer of the Italian Renaissance, states that Pisanello also worked in the workshop of Andrea del Castagno, author of the painted equestrian monument of Niccolò da Tolentino (1456) in the Cathedral in Florence. He must also have known Paolo Uccello, the painter of the Battle of San Romano with its many horses. Pisanello's love of drawing horses probably finds its origin in this relationship; but as there is so much unknown of his life, this attribution by Vasari is not reliable and may only be a legend.

Pisanello's Madonna of the Quail, now in the Museo di Castelvecchio in Verona, is signed by "Antonius Pisanus". It is tentatively dated at c. 1420. The style is a blend of the styles of Gentile da Fabriano and Stefano da Verona. This might show that Pisanello was also a pupil of the latter in Verona.