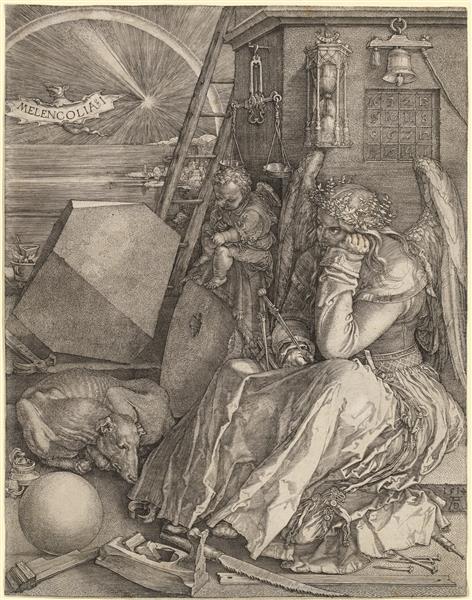 Dürer's Melencolia I is one of three large prints of 1513 and 1514 known as his Meisterstiche (master engravings). The other two are Knight, Death, and the Devil and Saint Jerome in His Study. The three are in no way a series, but they do correspond to the three kinds of virtue in medieval scholasticism--moral, theological, and intellectual--and they embody the complexity of Dürer's thought and that of his age.
Melencolia I is a depiction of the intellectual situation of the artist and is thus, by extension, a spiritual self-portrait of Dürer. In medieval philosophy each individual was thought to be dominated by one of the four humors; melancholy, associated with glack gall, was the least desirable of the four, and melancholics were considered the most likely to succumb to insanity. Renaissance thought, however, also linked melancholy with creative genius; thus, at the same time that this idea changed the status of this humor, it made the self-conscious artist aware that his gift came with terrible risks.
The winged personification of Melancholy, seated dejectedly with her head reasting on her hand, holds a caliper and is surrounded by other tools associated with geometry, the one of the seven liberal arts that underlies artistic creation--and the one through which Dürer, probably more than most artists, hoped to approach perfection in his own work. An influential treatise, the De Occulta Philosophia of Cornelius Agrippa of Nettesheim, almost certainly known to Dürer, probably holds the explanation for the number I in the title: creativity in the arts was the realm of the imagination, considered the first and lowest in the hierarchy of the three categories of genius. The next was the realm of reason, and the highest the realm of spirit. It is ironic that this image of the artist paralyzed and powerless exemplifies Dürer's own artistic power at its superlative height.

Melencolia I is a 1514 engraving by the German Renaissance master Albrecht Dürer. It is an allegorical composition which has been the subject of many interpretations. One of the most famous old master prints, it has sometimes been regarded as forming one of a conscious group of Meisterstiche ("master prints") with his Knight, Death and the Devil (1513) and Saint Jerome in his Study (1514).

The work has been the subject of more modern interpretation than almost any other print, including a two-volume book by Peter-Klaus Schuster, and a very influential discussion in Erwin Panofsky's Dürer monograph. The (archaically spelled) title Melencolia I appears within the engraving itself. It is the only one of Dürer's engravings to have a title in the plate. The date 1514 appears in the bottom row of the magic square, and also above Dürer's monogram at bottom right. It is likely that the "I" refers to the first of the three types of melancholia defined by the German humanist writer Cornelius Agrippa. In this type, Melencholia Imaginativa, which he held artists to be subject to, 'imagination' predominates over 'mind' or 'reason'.


One interpretation suggests the image references the depressive or melancholy state and accordingly explains various elements of the picture. Among the most conspicuous are:

An autobiographical interpretation of Melencolia I has been suggested by several historians. Iván Fenyő considered the print a representation of the artist beset by a loss of confidence, saying: "shortly before [Dürer] drew Melancholy, he wrote: 'what is beautiful I do not know' ... Melancholy is a lyric confession, the self-conscious introspection of the Renaissance artist, unprecedented in northern art. Erwin Panofsky is right in considering this admirable plate the spiritual self-portrait of Dürer."

Dürer's Melencolia is the patroness of the City of Dreadful Night in the final canto of James Thomson's poem of that name.