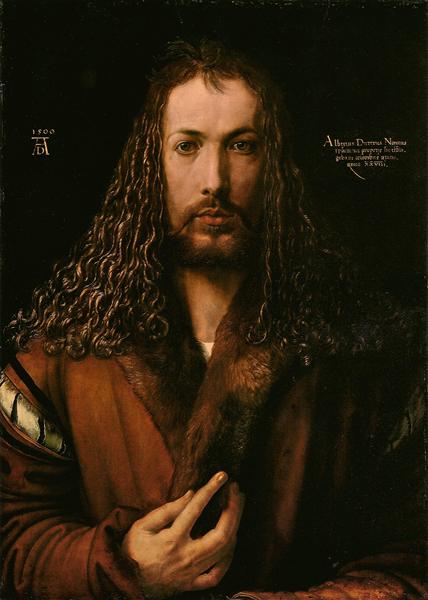 Self-Portrait at the Age of Twenty Eight

The genre of self-portraiture fully developed in Western painting during the Renaissance. Dürer’s self-portraits are not only among the earliest examples of the genre, but are also some of the finest works of self-portraiture ever produced in Western art. Self Portrait at the Age of Twenty Eight (1500) is particularly significant; it is an artistic proclamation that is deeply tied to how Durer wanted to position himself in the context of the Northern Renaissance and the Humanist movement.

The self-portrait gave Dürer the opportunity to display the breadth of his technical skill, particularly in creating the textures of his luscious hair and rich fur. It is likely that the portrait remained in Dürer’s cabinet, exhibited in private viewings to impress prospective clients and used for demonstrations to his students. In the self-portrait, the artist adorns a fashionable brown coat with a fur trim, a garment worn by 15th century noblemen. The garment is a symbol of social status, and indicates Dürer’s climb on the social ladder. This also represents the new status of artists in the Renaissance, where they were elevated from anonymity, and recognized publicly as creators and not mere craftsmen. The self-portrait is accompanied by the inscription: “I, Albrecht Durer of Nuremberg painted myself thus, with undying colors, at the age of twenty eight years”. In the Medieval era, the age twenty eight signified the transition to maturity. The inscription plays up this symbolism, signifying the artist entering a new era.

The frontal portrait is highly unusual for a secular portrait. It deliberately invites the comparison to the image of Christ, particularly to the iconography of Christ as Salvator Mundi (Savior of the World). The self-portrait evokes the concept of Imitatio Christi, the ideal of imitating and following the Christ. It is possible that Dürer emphasized the biblical idea that Man was created in God’s image, and through the self-portrait he was asserting that his creativity originates in divine grace. However, Dürer’s use of religious iconography also expresses humanist values. The frontal portrait exemplifies symmetry and harmony, ideals praised by ancient writers such as Cicero and Vitruvius, and promoted by Italian Renaissance humanist Leon Battista Alberti. Dürer, and in particularly this self-portrait, were praised by German Renaissance humanist, Konrad Celtes.

Dürer and Celtes, along with other German humanists were proponents of the Northern Renaissance, and had the ambition to bring forward a cultural Golden Age. In a text addressed to Dürer, Celtes links him to Apelles, a renowned painter of Ancient Greece. Celtes called Dürer the “second Apelles”, and indeed in the self-portrait Dürer presents himself as a Christian Apelles. The dark and minimal color scheme of the self-portrait may have been inspired by Apelles, who was celebrated for his four color system of painting and his dark, glossy glaze. Therefore, Self Portrait at the Age of Twenty Eight can be understood as an artistic statement, Dürer absorbing the praise of his contemporaries and reaffirming his position as the “new Apelles” of the Northern Renaissance.