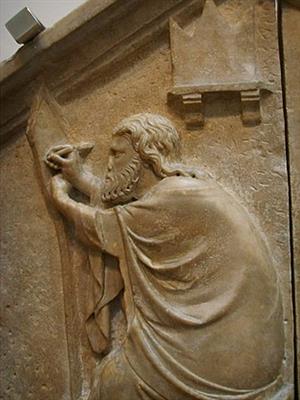 Apelles was an ancient Greek painter whose skills were described by the elder Pliny in his Natural History (77–79 AD). He is said to have been court artist to Alexander the Great.

According to Pliny, Alexander asked Apelles to portray his favourite concubine Campaspe. The artist fell in love with his subject while painting her. Because Alexander so admired the skills of Apelles he gave Campaspe to him.

Apelles was seen in the 15th and 16th centuries as an archetype of the ideal painter of the ancients. Hardly any paintings from Antiquity had been discovered at this period, but the descriptions of works by Apelles found in Pliny were used as the basis of compositions by painters such as Botticelli, who revered Antiquity.