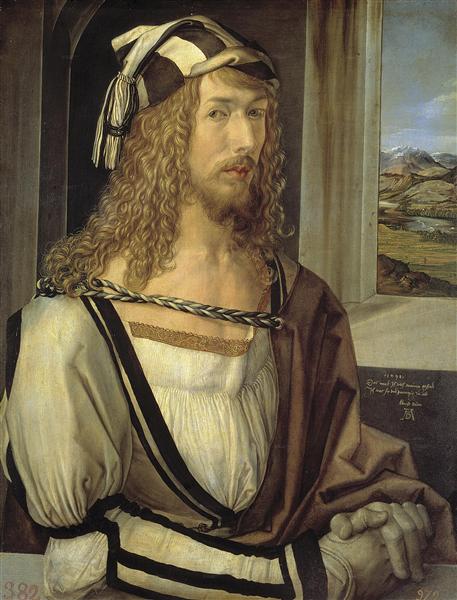 Self-portrait (or Self-portrait at 26) is the second of Albrecht Dürer's three painted self-portraits. In this work, executed in oil on wood panel in 1498, Dürer haughtily elevates himself to the social position he believed suited to an artist of his ability. Dürer depicts himself indoors under an arch, in half length, turning towards the viewer. Painted after his first trip to Italy, he is depicted bearing an arrogant, cocky expression which betrays the assured self-confidence of a young artist at the height of his ability. Dürer's presence dominates the pictorial space, from his hat which almost reaches the top of the canvas to his arm positioned on the lower ledge, where he rests his fingers enclosed in fine rich gloves.

Until some time in the 19th century the painting was hung with and kept as a companion piece with Portrait of Dürer's Father at 70; in 1636 the two paintings were gifted as a pair to Charles I of England by the city of Nuremberg, and this work was at some point acquired by Philip IV of Spain. Today it is in the Museo del Prado in Madrid.

Dürer shows himself before an open window with a flat plane with a lake before distant snow-capped mountains, the landscape perhaps representing either the memory of his recent travels abroad or his inner mental state. Light spills from the window, falling along his head to highlight both his delicate skin tones and long blond hair. Dürer is dressed with effeminate grace in flamboyant, extravagant clothes showing the influence of Italian fashion. His low-necked shirt or chemise is of fine linen, gathered and trimmed with a band of gold braid or embroidery, and worn under an open-fronted doublet and a cloak tied over one shoulder. His white jacket has black lining under a white pleated shirt of which the verticals match the horizontals of his headdress. His fingers are crossed, hidden inside silk gloves, an unusual pose for Dürer's early career; he always paid close attention in detailing the hands of his sitters who are usually showing holding an object; examples include a pillow, rosary, sheet of paper and flower.

Dürer presents himself as almost seductive, with a rakish patterned hat placed over long, almost girlishly curled blond locks of hair under a draped pointed hat with a tassel. He looks out at the viewer with a cool ironic stare.

Art historian Marcel Brion believes the self-portrait marks a farewell to his irresponsible youth, the acclaim he received during his visit to Italy and his general apprehension as the 15th century came to an end and dark clouds hung over the Germanic states. The middleground of the pleasing flat plain and lake may represent his travels from 1492 to 1497, yet they are shadowed by steep mountainous glaciers; forebodings of what lay in store. In this Brion interprets the artist's state as looking toward his future and past. Dürer's youthful character was enthusiastic, adventurous and inhibited, and after he left his hometown of Nuremberg in 1490 to travel as journeyman painter he was able to live his early youth with abandon and almost without consequence. By the time this portrait was painted he was back home, and old enough to begin to accept responsibilities.