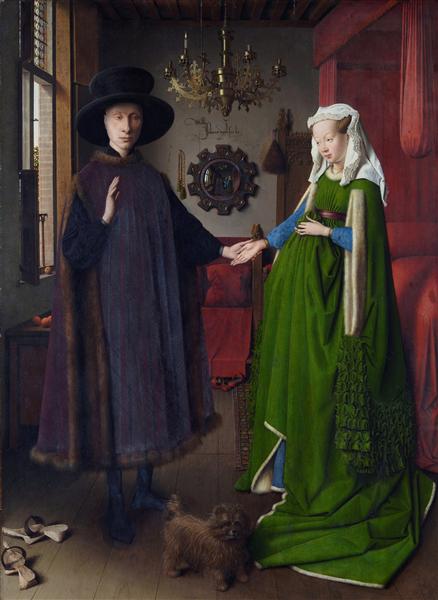 The artworks of the Italian Renaissance and the Northern European Renaissance were very different in style, subject matter, and visual sensibility. The Italian artists emphasized ultimate beauty in frescoes like Michelangelo's Sistine Chapel ceiling (1508-1512), paintings like Leonardo's Mona Lisa (c.1503-1519) and Raphael's La Fornarina (1520), sculptures like Michelangelo's David (1501-1504), and architecture such as Bramante's Tempietto (c.1500). The overall effect was one of classical harmony and idealized form.

In contrast, Northern European artists emphasized realism. Developing the medium of oil paint, they created altarpieces and panel paintings for churches and chapels that reflected the more somber sensibility of the Protestant Reformation, that extolled the virtues of man's ability to maintain a direct connection with God without the medium of church bureaucracy or figurehead, but rather an independent relationship through prayer, divine literature, and artwork. Art that portrayed religious figures or scenes followed Protestant theology by depicting people and stories absent of idolization, in a more realistic vein. Portraits focused not on beauty, but an authentic portrayal of the subject, with precise detail, objectively observed, that included its darker psychological elements.

While the Italian art of the 15th century was based on a mathematically calculated linear perspective, Northern art was determined by an empirical perspective. Unlike the Italian Renaissance artists, who aimed for a scientific and rational understanding of the world, and constructed a picture from within, so to speak, the Northern artists tried to get to the bottom of the mysteries of the world with a precise observation of all things, capturing every single detail. The painters learned from direct observation and their knowledge of the consistency of things. They painted what they saw - and thus, as in the drawing of the tiled floor in the works of Rogier van der Weyden, they came very close to the effect of central perspective. This approach, attached to observation and experience, showed the artists that shapes lose their contours the further away they are and that the intensity of the color decreases and assumes a bluish hue. For the landscape views which lent depth to their interiors, they invented - long before Leonardo - aerial and color perspective.

Instead of Greek and Roman art, Northern European artists drew upon the tradition of woodblock printing and manuscript illumination. The popularity of printmaking in Northern Europe at the time allowed images to be mass-produced and widely available to the public. Thus, the Protestant church was able to bring their theology to the people through artist-created books, prints, engravings, and pamphlets on a large scale. This spurred a vast market for the creation and distribution of works by artists, who were considered in their own way, to be divine creators. Accordingly, the genius of the Northern European Renaissance was most notably expressed in printmaking. Drawing upon a Northern tradition of woodblock prints, and exploiting the new technology of the printing press, artists like Bruegel, Hans Holbein the Younger, Lucas Cranach the Elder, and Albrecht Dürer, created masterworks in the medium (each of these artists succeeded in masterly paintings as well).

The religious masterpieces of the Northern European Renaissance were altarpieces, created in a multiple-panel format of which the side panels could be folded inward for preservation and portability. Artists including Hans Baldung Grien, Dieric Bouts, Hugo van der Goes, Hans Memling, Rogier van der Weyden, Jan van Eyck, and Matthias Grunewald did their most noted works in the format. Most of these works were commissioned for or by monasteries or churches. But many members of the prosperous merchant class and private individuals also commissioned the works such as Jan van Eyck's Dresden Triptych (1437). In some altarpieces, portraits of the donors were also included, as seen in Hugo van der Goes's Portinari Altarpiece (c. 1475).

Portraiture was an economic mainstay for many Northern European artists, and the mastery of oil painting allowed for artistic virtuosity, precise realism, and psychological portrayals. Rogier van der Weyden, Petrus Christus, Hans Holbein the Younger, Lucas Cranach the Elder, Hans Memling, Jan van Eyck, and Albrecht Dürer were all noted portraitists. The masterworks of Van Eyck and Dürer included self-portraits that became foundational to the form, in technique and sensibility. While Holbein the Younger and Cranach the Elder made iconic portraits of the notable leaders of the day, Holbein portrayed the English court, and Cranach the leaders of the Reformation. Christus created portraits like his Portrait of a Carthusian (1446), showing an anonymous monk, and his Isabel of Portugal with St. Elizabeth (1457-60), as well as Portrait of a Young Girl (c. 1470), highly innovative in the presentation of the figure against detailed, rather than flat, backgrounds. Rogier van den Weyden's portraits like his Portrait of a Woman (1460) were noted for their sculpted facial features and realistic expression.

The Northern European Renaissance was responsible for introducing various new genres that would become long-lasting motifs in Western art. Joachim Patinir pioneered the celebration of landscape in works like Flight into Egypt (c.1515), a genre that Bruegel further developed in works like Winter Landscape with Skaters and Bird Trap (1565). Bruegel also developed the genre of depicting rural life as seen in The Peasant Dance (1568), a signature subject that led him to be dubbed "peasant Bruegel" for his accurate portrayals of village existence. Albrecht Dürer's The Large Piece of Turf (1503) informed the development of still life painting. He also pioneered the genre of depicting animals as seen in his watercolor Hare (1502), or his woodcut The Rhinoceros (1515).