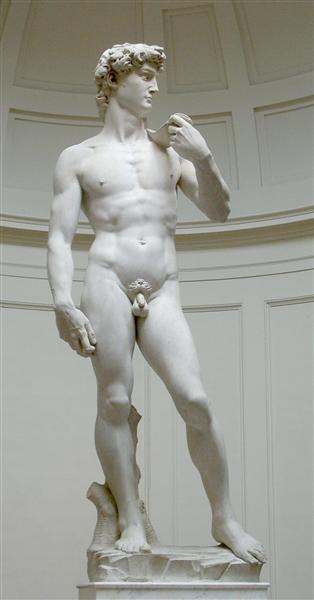 David is a masterpiece of Renaissance sculpture created between 1501 and 1504, by the Italian artist Michelangelo. It is a 5.17-metre (17.0 ft) marble statue of a standing male nude. The statue represents the Biblical hero David, a favoured subject in the art of Florence. It is possible that the David was conceived as a political statue before Michelangelo began to work on it. Certainly David the giant-killer had long been seen as a political figure in Florence, and images of the Biblical hero already carried political implications there.

David is a masterpiece of Renaissance sculpture created in marble between 1501 and 1504 by the Italian artist Michelangelo. David is a 5.17-metre (17.0 ft) marble statue of a standing male nude. The statue represents the Biblical hero David, a favoured subject in the art of Florence.


David was originally commissioned as one of a series of statues of prophets to be positioned along the roofline of the east end of Florence Cathedral, but was instead placed in a public square, outside the Palazzo Vecchio, the seat of civic government in Florence, in the Piazza della Signoria where it was unveiled on September 8, 1504. The statue was moved to the Galleria dell'Accademia, Florence, in 1873, and later replaced at the original location by a replica.


Because of the nature of the hero it represented, the statue soon came to symbolize the defence of civil liberties embodied in the Republic of Florence, an independent city-state threatened on all sides by more powerful rival states and by the hegemony of the Medici family. The eyes of David, with a warning glare, were turned towards Rome.


The history of the statue begins before Michelangelo's work on it from 1501 to 1504. Prior to Michelangelo's involvement, the Overseers of the Office of Works of Florence Cathedral, consisting mostly of members of the influential woolen cloth guild, the Arte della Lana, had plans to commission a series of twelve large Old Testament sculptures for the buttresses of the cathedral. In 1410 Donatello made the first of the statues, a figure of Joshua in terracotta. A figure of Hercules, also in terracotta, was commissioned from the Florentine sculptor Agostino di Duccio in 1463 and was made perhaps under Donatello's direction. Eager to continue their project, in 1464, the Operai contracted Agostino to create a sculpture of David. A block of marble was provided from a quarry in Carrara, a town in the Apuan Alps in northern Tuscany. Agostino only got as far as beginning to shape the legs, feet and the torso, roughing out some drapery and probably gouging a hole between the legs. His association with the project ceased, for reasons unknown, with the death of Donatello in 1466, and ten years later Antonio Rossellino was commissioned to take up where Agostino had left off.


Rossellino's contract was terminated soon thereafter, and the block of marble remained neglected for 26 years, all the while exposed to the elements in the yard of the cathedral workshop. This was of great concern to the Opera authorities, as such a large piece of marble not only was costly but represented a large amount of labour and difficulty in its transportation to Florence. In 1500, an inventory of the cathedral workshops described the piece as "a certain figure of marble called David, badly blocked out and supine." A year later, documents showed that the Operai were determined to find an artist who could take this large piece of marble and turn it into a finished work of art. They ordered the block of stone, which they called The Giant, "raised on its feet" so that a master experienced in this kind of work might examine it and express an opinion. Though Leonardo da Vinci and others were consulted, it was Michelangelo, only 26 years old, who convinced the Operai that he deserved the commission. On 16 August 1501, Michelangelo was given the official contract to undertake this challenging new task. He began carving the statue early in the morning on 13 September, a month after he was awarded the contract. He would work on the massive statue for more than two years.