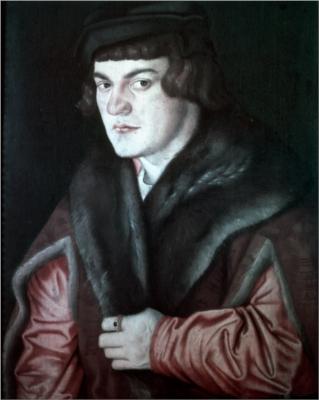 Hans Baldung Grien or Grün (c. 1484 – September 1545) was a German artist in painting and printmaking who was considered the most gifted student of Albrecht Dürer. Throughout his lifetime, Baldung developed a distinctive style, full of color, expression and imagination. His talents were varied, and he produced a great and extensive variety of work including portraits, woodcuts, altarpieces, drawings, tapestries, allegories and mythological motifs.

Hans Baldung was born in Swabia, Germany around the year 1484 to a family of intellectuals, academics and professionals. His father was a lawyer and his uncle was a doctor, and many other of his family members maintained professional degrees. In fact, Baldung was the first male in his family not to attend university, but was one of the first German artists to come from an academic family. His earliest training as an artist began around 1500 in the Upper Rhineland by an artist from Strasbourg.

Beginning in 1503, Baldung was an apprentice for the most well renowned German artist of the day: Albrecht Dürer. Here, he may have been given his nickname “Grien.” This name is thought to have come foremost from a preference to the color green: he seems to have worn green clothing. He probably also got this nickname to distinguish him from at least two other Hanses in Dürer's shop, Hans Schäufelein and Hans Suess von Kulmbach. He later included the name "Grien" in his monogram, and it has also been suggested that the name came from, or consciously echoed, "grienhals", a German word for witch—one of his signature themes. Hans quickly picked up Dürer's influence and style, and they became good friends: Baldung managed Dürer's workshop during the latter's second sojourn in Venice. In his later trip to the Netherlands in 1521 Dürer's diary shows that he took with him and sold prints by Baldung. On Dürer's death Baldung was sent a lock of his hair, which suggests a close friendship. Near the end of his apprenticeship, Grien oversaw the production of stained glass, woodcuts and engravings, and therefore developed an affinity for them.

In 1509, when Baldung’s apprenticeship was complete, he moved back to Strasbourg and became a citizen there. He became a celebrity of the town, and received many important commissions. The following year he married Margarethe Herlin, a local merchant's daughter, joined the guild "zur Steltz", opened a workshop, and began signing his works with the HGB monogram that he used for the rest of his career. His style also became much more deliberately individual—a tendency some art historians have termed "mannerist."