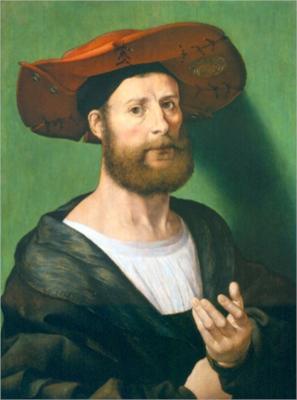 Jan Gossaert (c. 1478 – 1 October 1532) was a French-speaking painter from the Low Countries also known as Jan Mabuse (the name he adopted from his birthplace, Maubeuge) or Jennyn van Hennegouwe (Hainaut), as he called himself when he matriculated in the Guild of Saint Luke, at Antwerp, in 1503. He was one of the first painters of Dutch and Flemish Renaissance painting to visit Italy and Rome, which he did in 1508–09, and a leader of the style known as Romanism, which brought elements of Italian Renaissance painting to the north, sometimes with a rather awkward effect. He achieved fame across at least northern Europe, and painted religious subjects, including large altarpieces, but also portraits and mythological subjects, including some nudity.

From at least 1508 he was apparently continuous employed, or at least retained, by quasi-royal patrons, mostly members of the extended Habsburg family, heirs to the Valois Duchy of Burgundy. These were Philip of Burgundy, Adolf of Burgundy, Christian II of Denmark when in exile, and Mencía de Mendoza, Countess of Nassau, third wife of Henry III of Nassau-Breda.

He was a contemporary of Albrecht Dürer and the rather younger Lucas van Leyden, whom he knew, but he has tended to be less highly regarded in modern times than they were. Unlike them, he was not a printmaker, though his surviving drawings are very fine, and are preferred by some to his paintings.

His name was in fact "Jan Gossart", and he was so known in his lifetime; the Dutch version "Gossaert" crept into later sources, despite Gossart's first language being French. Little is known of his early life. One of his earliest biographers, Karel van Mander, claimed he was from a small town in Artois or Henegouwen (County of Hainaut) called Maubeuge or Maubuse. Other scholars have determined he was the son of a bookbinder who received his training at Maubeuge Abbey, while the RKD mentions there is evidence to support a claim that he was born in Duurstede Castle. He is registered in the Antwerp Guild of Saint Luke in 1503.

In 1508-9 he travelled to Rome, either in the company of, or later sent by, Philip of Burgundy, an illegitimate son of Duke Philip the Good, who was sent as ambassador to Pope Julius II by Philip the Handsome. Philip's party, very likely including Gossaert, left the Netherlands in October 1508, arrived in Rome on 14 January 1509, and was back at The Hague by 28 June 1509. Although the details are unclear, it seems that Gossaert remained in Philip's employment until he died in 1524, by then Bishop of Utrecht. However, throughout this time he was able to work for other patrons, mostly friends of Philip.

In 1509–17 Gossaert was registered as a resident of Middelburg. According to Van Mander he was one of the first Flemish artists to bring back the Italian manner of painting with lots of nudity in historical allegories. From 1517–24 he is registered at Duurstede Castle where according to the RKD, he had Jan van Scorel as pupil. From 1524 onwards he returned to Middelburg as court painter to Adolf of Burgundy, another Habsburg relative. Jan Mertens the Younger was another pupil.