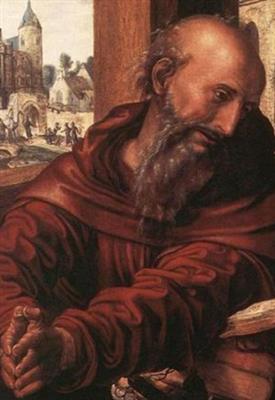 Jan Sanders van Hemessen (c. 1500 – c. 1566) was a leading Flemish Renaissance painter, belonging to the group of Italianizing Flemish painters called the Romanists, who were influenced by Italian Renaissance painting. Van Hemessen had visited Italy during the 1520s, and also Fontainebleau near Paris in the mid 1530s, where he was able to view the work of the colony of Italian artists known as the First School of Fontainebleau, who were working on the decorations for the Palace of Fontainebleau.

Hemessen played an important role in the development of genre painting, through his large scenes with religious or worldly subjects, set in towns with contemporary dress and architecture. These focused on human failings such as greed and vanity, and some show an interest in subjects with a financial angle. These develop the "Mannerist inversion" later taken further by Pieter Aertsen, where the small religious scene in the background finally reveals the full meaning of the painting, which is dominated by a large foreground scene seemingly devoted to secular genre subject matter. One of his best known works, the Parable of the Prodigal Son now in Brussels, was also a key forerunner of the later merry company tradition, and he painted a pure genre painting set in tavern. He also painted a small number of portraits, some of exceptional quality, influenced by Bronzino.

He was based in Antwerp between 1519 and 1550, joining the artist's Guild of Saint Luke there in 1524. After 1550 he may have moved to Haarlem. He painted several religious subjects, and many others may have been destroyed in the Beeldenstorm that swept through Antwerp in the year of his death.

Jan Sanders van Hemessen was born in Hemiksem, then called Hemessen or Heymissen. He was an apprentice of Hendrick van Cleve I in Antwerp. He traveled to Italy early in his career, around 1520. Here he studied both models from classical antiquity, such as the Laocoön as well as the contemporary works of Michelangelo and Raphael. He returned to Antwerp where he entered the local Guild of Saint Luke as a master in 1524.

Van Hemessen is believed to have worked early in his career at the royal court in Mechelen. Here he may have first encountered Jan Gossaert, a court painter, as well as the Master of the Legend of the Magdalen. Although the early biographer Karel van Mander wrote that van Hemessen spent time in Haarlem, there is no evidence for this statement.

Van Hemessen was one of the earliest Netherlandish artists to exploit the genre character of biblical subjects often for a moralizing purpose. Van Hemessen specialized in scenes of human character flaws such as vanity and greed. His pictures often have a religious subject. His style helped found the Flemish traditions of genre painting.