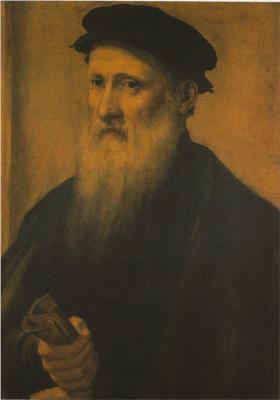 He lived all his life in Florence, and from his late 30s was kept busy as the court painter of Cosimo I de' Medici, Grand Duke of Tuscany. He was mainly a portraitist but also painted many religious subjects, and a few allegorical subjects, which include what is probably his best known work, Venus, Cupid, Folly and Time, c. 1544–45, now in London. Many portraits of the Medicis exist in several versions with varying degrees of participation by Bronzino himself, as Cosimo was a pioneer of the copied portrait sent as a diplomatic gift.

He trained with Pontormo, the leading Florentine painter of the first generation of Mannerism, and his style was greatly influenced by him, but his elegant and somewhat elongated figures always appear calm and somewhat reserved, lacking the agitation and emotion of those by his teacher. They have often been found cold and artificial, and his reputation suffered from the general critical disfavour attached to Mannerism in the 19th and early 20th centuries. Recent decades have been more appreciative of his art.

Bronzino was born in Florence, the son of a butcher. According to his contemporary Vasari, Bronzino was a pupil first of Raffaellino del Garbo, and then of Pontormo, to whom he was apprenticed at 14. Pontormo is thought to have introduced a portrait of Bronzino as a child (seated on a step) into one of his series on Joseph in Egypt now in the National Gallery, London. Pontormo exercised a dominant influence on Bronzino's developing style, and the two were to remain collaborators for most of the former's life. An early example of Bronzino's hand has often been detected in the Capponi Chapel in the church of Santa Felicita by the Ponte Vecchio in Florence. Pontormo designed the interior and executed the altarpiece, the masterly Deposition from the Cross and the sidewall fresco Annunciation. Bronzino apparently was assigned the frescoes on the dome, which have not survived. Of the four empanelled tondi or roundels depicting each of the evangelists, two were said by Vasari to have been painted by Bronzino. His style is so similar to his master's that scholars still debate the specific attributions.

Towards the end of his life, Bronzino took a prominent part in the activities of the Florentine Accademia delle Arti del Disegno, of which he was a founding member in 1563.

The painter Alessandro Allori was his favourite pupil, and Bronzino was living in the Allori family house at the time of his death in Florence in 1572 (Alessandro was also the father of Cristofano Allori). Bronzino spent the majority of his career in Florence.

Bronzino first received Medici patronage in 1539, when he was one of the many artists chosen to execute the elaborate decorations for the wedding of Cosimo I de' Medici to Eleonora di Toledo, daughter of the Viceroy of Naples. It was not long before he became, and remained for most of his career, the official court painter of the Duke and his court. His portrait figures—often read as static, elegant, and stylish exemplars of unemotional haughtiness and assurance—influenced the course of European court portraiture for a century. These well known paintings exist in many workshop versions and copies. In addition to images of the Florentine elite, Bronzino also painted idealized portraits of the poets Dante (c. 1530, now in Washington, DC) and Petrarch.