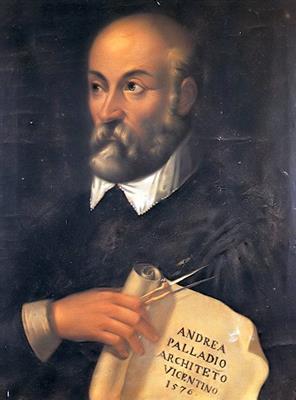 Andrea Palladio (/pəˈlɑːdioʊ/ pə-LAH-dee-oh, Italian: [anˈdrɛːa palˈlaːdjo]; 30 November 1508 – 19 August 1580) was an Italian Renaissance architect active in the Venetian Republic. Palladio, influenced by Roman and Greek architecture, primarily Vitruvius, is widely considered to be one of the most influential individuals in the history of architecture. While he designed churches and palaces, he was best known for country houses and villas. His teachings, summarized in the architectural treatise, The Four Books of Architecture, gained him wide recognition.


Palladio was born on 30 November 1508 in Padua and was given the name Andrea di Pietro della Gondola. His father, Pietro, called "della Gondola", was a miller. From an early age, Andrea Palladio was introduced into the work of building. When he was thirteen, his father arranged for him to be an apprentice stonecutter for a period of six years in the workshop of Bartolomeo Cavazza da Sossano, a noted sculptor, whose projects included the altar in the Church of Santa Maria dei Carmini in Padua. Bartolomeo Cavazza is said to have imposed particularly hard working conditions: Palladio fled the workshop in April 1523 and went to Vicenza, but was forced to return to fulfil his contract. In 1524, when his contract was finished, he moved permanently to Vicenza, where he resided for most of his life. He became an assistant to a prominent stonecutter and stonemason, Giovanni di Giacomo da Porlezza in Pedemuro San Biagio, where he joined the guild of stonemasons and bricklayers. He was employed as a stonemason to make monuments and decorative sculptures.


His career was unexceptional until 1538–39; when he had reached the age of thirty, he was employed by the humanist poet and scholar Gian Giorgio Trissino to rebuild his residence, the Villa Trissino at Cricoli. Trissino was deeply engaged in the study of ancient Roman architecture, particularly the work of Vitruvius, which had become available in print in 1486. In 1540, Palladio finally received the formal title of architect. In 1541, he made a first trip to Rome, accompanied by Trissino, to see the classical monuments first-hand. He took another, longer trip to Rome with Trissino from the autumn of 1545 to the first months of 1546, and then another trip in 1546–1547. He also visited and studied the Roman works in Tivoli, Palestrina and Albano


Trissino exposed Palladio to the history and arts of Rome, which gave him inspiration for his future buildings. Trissino also gave him the name by which he became known, Palladio, an allusion to the Greek goddess of wisdom Pallas Athene and to a character of a play by Trissino. The word Palladio means Wise one.


His early works include a series of villas around Vicenza. These were sometimes influenced by the work of his predecessor, Giulio Romano, and were similar to the villa of his patron, Gian Giorgio Trissino, at Cricoli, for which he had built an addition before his first trip to Rome.