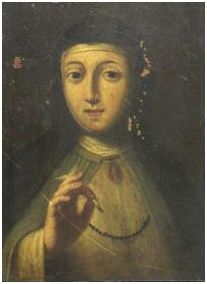 Sister Plautilla Nelli (1524–1588) was a self-taught nun-artist and the first-known female Renaissance painter of Florence, Italy. She was a nun of the Dominican convent of St. Catherine of Siena located in Piazza San Marco, Florence, and was heavily influenced by the teachings of Savonarola and by the artwork of Fra Bartolomeo.

Pulisena Margherita Nelli was born into a wealthy family in Florence, Italy. Her father, Piero di Luca Nelli, was a successful fabric merchant and her ancestors originated from the Tuscan valley area of Mugello, as did the Medici dynasty. There is a modern-day street in Florence, Via del Canto de’ Nelli, in the San Lorenzo district, named for her family, and the New Sacristy of the Church of San Lorenzo is the original site of her family homes.

She became a nun at the age of fourteen, taking on the name Suor Plautilla. Nelli's convent of Santa Caterina da Siena, of which she was prioress three times, was managed by the Dominican friars of San Marco, led by Savonarola. Savonarola's preachings promoted devotional painting and drawing by religious women to avoid sloth, thus the convent became a center for nun-artists. Her sister, also a nun, Costanza, (Suor Petronilla) wrote a life of Savonarola.

Nelli enjoyed the esteemed favor of many patrons (including women), executing large pieces and miniatures. Sixteenth-century art historian Giorgio Vasari wrote, “and in the houses of gentlemen throughout Florence, there are so many pictures, that it would be tedious to attempt to speak of them all." Fra' Serafino Razzi, a sixteenth-century Dominican Friar, historian and Savonaroliano (disciple of Savonarola), named three nuns of Santa Caterina as disciples of Plautilla, Suor Prudenza Cambi, Suor Agata Trabalesi, Suor Maria Ruggieri, and three others as additional producers: Suor Veronica, Suor Dionisia Niccolini, and his sister Suor Maria Angelica Razzi.

Though she was self-taught, Nelli copied works of the mannerist painter Agnolo Bronzino and high Renaissance painter Andrea del Sarto. Her primary source of inspiration came from copying works of Fra Bartolomeo, which mirrored the classicism-style enforced by Savonarola's artistic theories. Fra Bartolomeo left his drawings to his pupil, Fra Paolino who, in turn left them in the possession of "a nun who paints" in the convent of Santa Caterina da Siena.

Nelli's work is distinguished from that of her influencers by the heightened sentiment she adds to each of her characters' expressions. Author Dr. Jane Fortune referred to her Lamentation with Saints and the “raw emotional grief surrounding Christ’s death as depicted through the red eyes and visible tears of its female figures” as a case in point. Most of Nelli’s works are large-scale, which was most uncommon for a woman to paint, during her time period.

Nelli is one of the few female artists mentioned in Vasari's Lives of the Most Excellent Painters, Sculptors and Architects. Nelli's work is characterized by religious themes, with vivid portrayals of emotion on her characters' faces. Nelli lacked any formal training and her male figures are said to have “feminine characteristics”, as her religious vocation prohibited study of the nude male.