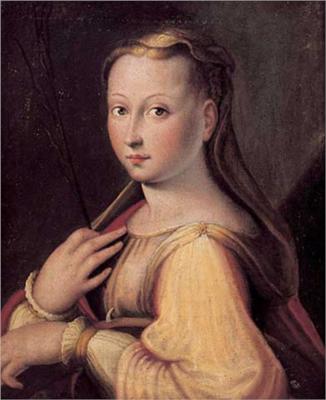 Barbara Longhi (/bɑːrˈbɑːrə ˈlɒŋɡi/; 21 September 1552 – 23 December 1638) was an Italian painter. She was much admired in her lifetime as a portraitist, although most of her portraits are now lost or unattributed. Her work, such as her many Madonna and Child paintings, earned her a fine reputation as an artist.

Barbara Longhi was born on 21 September 1552 in the central Italian city of Ravenna, where she spent her entire life. Her father, Luca Longhi (1507–1580) was a well-known Mannerist painter, and her older brother Francesco (1544–1618) was also a painter. Both siblings received painting education from their father and were part of his studio, with Barbara assisting in such projects as work on large altarpieces. She also modeled, and gained some familiarity with the process of marketing her artwork to patrons. Although her training was completed by 1570, her ties to her family and to her father's workshop remained strong. Very little is known of her life, not even whether she was ever married.

Longhi was very respected as a portraitist, but only one of her portraits, the Camaldolese Monk, is known today. This is also her only known painting depicting an adult male, and one of only a few that includes a date (although the last digit is not entirely legible; it may be 1570 or 1573).

Longhi's father had depicted her as Saint Barbara in his 1570 painting Virgin and Child Enthroned with Saints. Longhi also probably modeled for her father's Nuptials of Cana. Her Saint Catherine of Alexandria (above) bears a strong resemblance to her father's depictions of her in the two paintings mentioned above, and it is generally acknowledged as a self-portrait. Of Longhi's portrayal of herself as the aristocratic, cultured Saint Catherine of Alexandria, Irene Graziani writes that "when she exhibits an image of herself, Barbara, too, is presented according to the model of the virtuous, elegant and erudite woman, revisiting the themes which Lavinia [Fontana] had developed several years earlier in Bologna, according to a repertoire tied to late Mannerism". It has been suggested that Longhi may have presented her self-portrait as the devotional image of a saint in order to avoid the appearance of indulging in the sin of vanity. Originally commissioned for the monastery of Sant'Apollinare in Classe, the painting was acquired by the Museo d'Arte della Città di Ravenna in 1829, and underwent a restoration in 1980. Several other of her depictions of Catherine of Alexandria exist.

Most of Longhi's paintings are unsigned, but on one she included the initials "B.L.F.", standing for "Barbara Longhi fecit" ("made by Barbara Longhi") and on another, "B.L.P.", for "Barbara Longhi pinxit" ("painted by Barbara Longhi"). As almost all of her work was unsigned, it is unknown how many paintings she created or are still in existence. Only about fifteen are definitively attributed to her. Of those, about twelve are paintings of the Virgin and Child; such paintings were very popular during the Counter-Reformation. It is thought that some of her works may be erroneously attributed to her father.