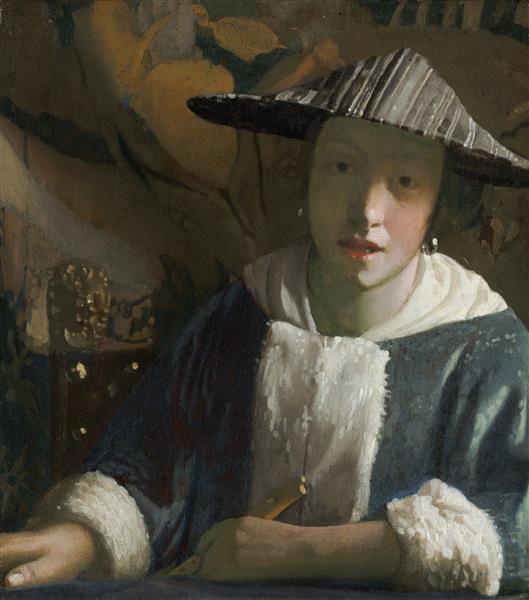 Girl with a Flute

Girl with a Flute is a small painting attributed to the Dutch Golden Age painter Johannes Vermeer, executed 1665–1670. The work is in possession of the National Gallery of Art in Washington, D.C., just as Woman Holding a Balance, A Lady Writing a Letter and Girl with a Red Hat (also attributed to Vermeer).

It is contested whether the painting can be attributed to Johannes Vermeer. Possibly another painter finished the painting after an initial start by Vermeer. The composition is comparable to Girl with a Red Hat, the only other work Vermeer painted on panel. The bluegreen jacket with the fur lining is also used in Woman Holding a Balance and The Concert and is listed as a 'oude groene false mantel met een witte bonte kant' in Vermeer's inventory after his death. Just like Girl with a Red Hat and Girl with a Pearl Earring the model wears a glass, lacquered pearl earring.

Girl with a Flute is a so-called tronie, a study of a remarkable facial expression or a stock character in costume. This was a popular genre in Dutch Golden Age painting. Tronies were produced for the mass market, not for specific patrons. Unlike with portraits the models were always anonymous.

Girl with a Flute was in possession of the family of Pieter van Ruijven and was sold at the 1696 Dissius auction in Amsterdam. The work was probably one of the three tronies with catalogue numbers 38, 39 and 40. In the 19th century the painting was owned by the Van Son family in Brabant. In 1923 the American art collector Joseph E. Widener bought the painting. Widener donated his extensive and valuable art collection in 1939 to the National Gallery of Art, including this Vermeer painting.