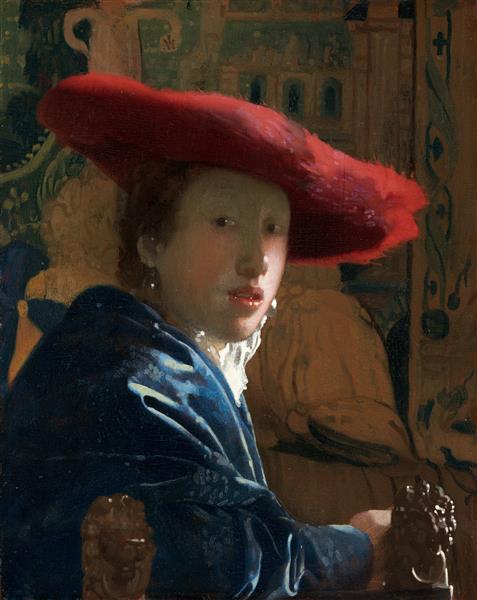 Girl with the red hat

Girl with a Red Hat is a rather small painting, signed by the Dutch painter Johannes Vermeer. It is seen as one of a number of Vermeer's tronies – depictions of models fancifully dressed that were not (as far as is known) intended to be portraits of specific, identifiable subjects. Others believe it is a portrait. Whether Vermeer chose family members as models or found them elsewhere in Delft is irrelevant to the appreciation of his paintings. Its attribution to Vermeer – as it is on a (recycled) wood panel and not on canvas – has been a matter of controversy with scholars on both sides of the argument.

The painting, supposed to be executed 1665–1666, may have been among those owned by Vermeer's patron, Pieter Claesz van Ruijven and possibly, through inheritance it may have been passed on to his wife, Maria de Knuijt who died 1681; her daughter, Magdalena van Ruijven; and Magdalena's husband, Jacob Abrahamsz Dissius. It is thought to have been sold on an auction in Amsterdam on May 16, 1696 (probably no. 38, 39 or 40).

It was bought at a sale at the Hôtel de Bouillon, in Paris on December 10, 1822 (no. 28.) by Baron Louis Marie Baptiste Atthalin for 200 French francs. After his death it came to his nephew and adopted son, Laurent Atthalin; by inheritance to Baron Gaston Laurent-Atthelin and by inheritance to his wife, Baroness Laurent-Atthelin. The painting was sold by M. Knoedler & Co., New York and London, in November 1925 to Andrew W. Mellon for $290.000, who deeded it on March 30, 1932 to The A.W. Mellon Educational and Charitable Trust in Pittsburgh (a holding-place for Mellon's pictures while the National Gallery of Art was being established). The trust gave it to the NGA in 1937.

The older pigment analysis by H. Kuhn was supplemented by a more recent investigation. The red hat is painted in two layers: the lower layer consists of vermilion mixed with a black pigment, the upper layer is a madder lake glaze. Vermeer used a mixture of azurite and yellow ochre for the green areas and umber (umbra) for the browns in the wall.