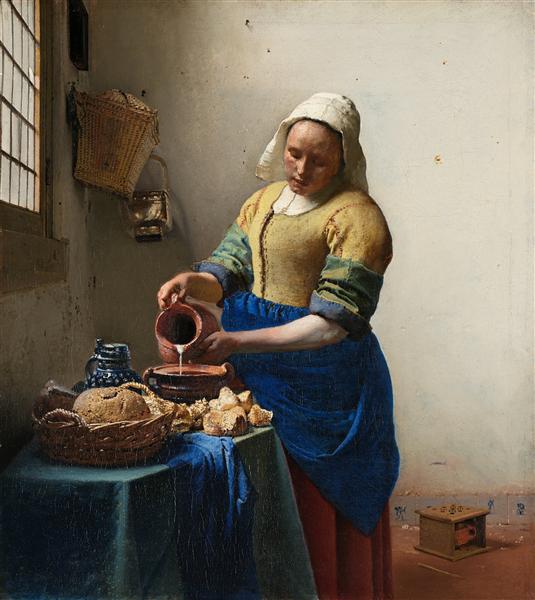 Even though servants and kitchen maids were recurring characters in 17th century Dutch genre paintings, Jan Vermeer’s The Milkmaid is a unique example, in which the kitchen maid is the subject of a single figure portrait. The milkmaid is fully absorbed in her activity, carefully pouring the milk. Even though the surrounding objects indicate that the milkmaid is in a kitchen, the indoor setting was kept relatively bare. X-ray studies of the painting show that Vermeer decided to eliminate a wall hanging, probably a map, from the back wall. Additionally, there was a basket of clothes in the right corner that the artist replaced with a footwarmer. By making these adjustments, the artist placed greater emphasis on the milkmaid and her activity.

This representation stands in contrast to other depictions of servants by his contemporaries, such as The idle servant (1655) by Dutch Golden Age painter Nicolaes Maes. In The idle servant, Maes constructs a narrative, the kitchen maid that fell asleep in front of a heap of dishes and then was found by her mistress. Like most genre paintings, this painting has a moral aspect: the mistress gestures towards the sleeping maid and the dishes, as a warning against idleness. In comparison, The Milkmaid does not present a story or anecdote, it simply describes a moment in time. For this reason, Vermeer’s composition displays only a limited space, directing the viewer’s attention to the milkmaid’s activity.

Vermeer’s milkmaid has a strong physical presence, created through expert use of light and shade. The light source is coming from the window and immersing the milkmaid in daylight. The artist created a light and dark contrast between the maid and the rear wall, in which the shaded parts of the wall correspond to where the light falls on the woman’s figure. Similarly, on the right side, the wall is lightest in order to enhance the shaded portion of the maid’s figure. Vermeer also emphasized her silhouette by painting a white contour line along her arm and shoulder. It was suggested that the pose of Vermeer’s milkmaid was inspired by Domenico Fiasella’s painting Queen Artemisia (ca. 1645). Generally speaking, it would be unusual for an artist to base a genre painting of a kitchen maid on a portrait of an ancient Greek queen. However, given Vermeer’s deviation from common depictions of servants in The Milkmaid, the connection to Fiasella’s Artemisia becomes more plausible. Vermeer depicted his milkmaid with empathy and dignity, and according to some the character also conveys morality. The portrayal of the maid concentrated on her work can relate to virtuosity and modesty, ideals of womanhood in Dutch 17th century society. The milkmaid displays her virtue through her diligent preparation of food. There are some elements in the painting that are indicative of romantic love, namely the footwarmer and the cupid tiles bordering the lower edge of the floor. However, because both of these are not prominent in the painting, it is unlikely that romantic love is the central theme. In this context, the footwarmer and the tiles symbolize human caring and the maid’s devotion toward others. In this way, these elements contribute to the central theme of the milkmaid pouring milk and providing nourishment.

The Milkmaid (Dutch: De Melkmeid or Het Melkmeisje), sometimes called The Kitchen Maid, is an oil-on-canvas painting of a "milkmaid", in fact, a domestic kitchen maid, by the Dutch artist Johannes Vermeer. It is now in the Rijksmuseum in Amsterdam, the Netherlands, which regards it as "unquestionably one of the museum's finest attractions".

The exact year of the painting's completion is unknown, with estimates varying by source. The Rijksmuseum estimates it as circa 1658. According to the Metropolitan Museum of Art in New York City, it was painted in about 1657 or 1658. The "Essential Vermeer" website gives a broader range of 1658–1661.

Despite its traditional title, the picture clearly shows a kitchen or housemaid, a low-ranking indoor servant, rather than a milkmaid who actually milks the cow, in a plain room carefully pouring milk into a squat earthenware container (now commonly known as a "Dutch oven") on a table. Also on the table are various types of bread. She is a young, sturdily built woman wearing a crisp linen cap, a blue apron and work sleeves pushed up from thick forearms. A foot warmer is on the floor behind her, near Delft wall tiles depicting Cupid (to the viewer's left) and a figure with a pole (to the right). Intense light streams from the window on the left side of the canvas.

The painting is strikingly illusionistic, conveying not just details but a sense of the weight of the woman and the table. "The light, though bright, doesn't wash out the rough texture of the bread crusts or flatten the volumes of the maid's thick waist and rounded shoulders", wrote Karen Rosenberg, an art critic for The New York Times. Yet with half of the woman's face in shadow, it is "impossible to tell whether her downcast eyes and pursed lips express wistfulness or concentration," she wrote.

"It's a little bit of a Mona Lisa effect" in modern viewers' reactions to the painting, according to Walter Liedtke, curator of the department of European paintings at The Metropolitan Museum of Art, and organizer of two Vermeer exhibits. "There's a bit of mystery about her for modern audiences. She is going about her daily task, faintly smiling. And our reaction is 'What is she thinking?'"

The woman would have been known as a "kitchen maid" or maid-of-all-work rather than a specialised "milkmaid" at the time the painting was created: "milk maids" were women who milked cows; kitchen maids worked in kitchens. For at least two centuries before the painting was created, milkmaids and kitchen maids had a reputation as being predisposed to love or sex, and this was frequently reflected in Dutch paintings of kitchen and market scenes from Antwerp, Utrecht and Delft. Some of the paintings were slyly suggestive, like The Milkmaid, others more coarsely so.

The leading artists in this tradition were the Antwerp painters Joachim Beuckelaer (c. 1535–1575) and Frans Snyders (1579–1657), who had many followers and imitators, as well as Pieter Aertsen (who, like Beukelaer, had clients in Delft), the Utrecht Mannerist painter Joachim Wtewael (1566–1638), and his son, Peter Wtewael (1596–1660). Closer to Vermeer's day, Nicolaes Maes painted several comic pictures now given titles such as The Lazy Servant. However by this time there was an alternative convention of painting women at work in the home as exemplars of Dutch domestic virtue, dealt with at length by Simon Schama.