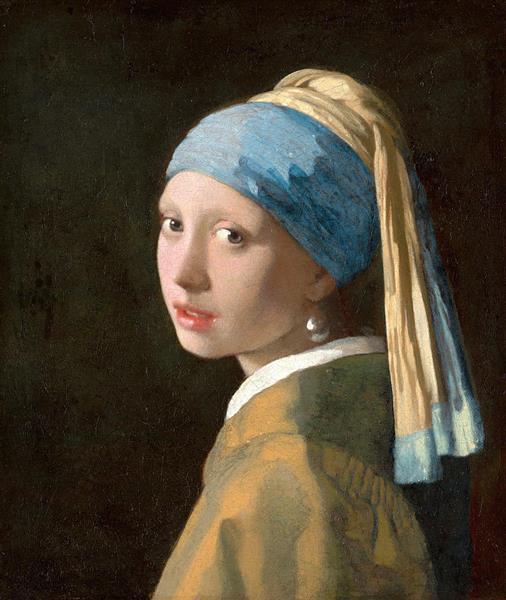 The Girl with a Pearl Earring

The Girl with a Pearl Earring, Jan Vermeer’s most famous painting, is often called the ‘Dutch Mona Lisa’. The comparison to Leonardo Da Vinci’s Mona Lisa (ca. 1504) makes sense: both paintings share an air of mystery, from the model’s enigmatic gaze to the speculations surrounding the identities of the women in the paintings. The identity of the model in The Girl with a Pearl Earring remains unknown. Some have suggested that it is Vermeer’s eldest daughter, Maria, however there is no compelling evidence to confirm this assertion.

The painting is considered a tronie, a subcategory of portraiture that was popular in the Dutch Golden Age and Flemish Baroque art. Tronies are studies of facial characteristics, stereotypical characters or exaggerated expressions. Vermeer captures a fleeting moment, the girl turning her head, her lips slightly parted while she directly faces the viewer. The girl wears a head wrap inspired by a Turkish turban and an enormous pearl earring. These exotic elements increase the drama of the painting, and give the artist the opportunity to display artistic effects in his treatment of light and texture. Another tronie by Vermeer, Study of A Young Woman (ca. 1665-1667) is often seen as a variant or counterpart of The Girl with a Pearl Earring. In both paintings, the figures are set against a black background, wearing the pearl earring and having a scarf draped over the shoulder. While The Girl with a Pearl Earring is an idealized beauty, the Study of A Young Woman shows plain and imperfect facial features.

Even though The Girl with a Pearl Earring is consistent with Vermeer’s style and technique, it is distinct in a few noteworthy ways. Vermeer used his inventive method of layering paint that created the sensuality of the soft skin. This was accomplished by layering a thin flesh-colored glaze over a transparent under-modelling (the initial layers of color placed on the surface). Some have suggested that Vermeer was able to capture these details and effects through the use of camera obscura, an optical device that was able to project an image onto a flat surface. Vermeer employed this technique in other paintings, like Woman Holding a Balance (1665) and Young Woman with a Water Pitcher (ca. 1662-1665). In both cases, Vermeer used this technique of layering paint when creating the shaded portions of the headdress on the models. However, in The Girl with a Pearl Earring, the application of paint is bolder and more expressive. In a 1994 restoration, it was discovered that Vermeer accentuated girl’s mouth with small dots of pink paint, and placed light accents in her eyes to brighten her face. The model is set against a dark background, which is very different than the detailed settings of Vermeer’s interior paintings, such as the mentioned Woman Holding a Balance and Young Woman with a Water Pitcher. In the interior settings, the women are portrayed in contemplative and quiet moments, while The Girl with a Pearl Earring has a sense of immediacy and drama. The painting has a timeless quality, the girl bears no symbolic attributes, and she is not placed in any specific context. For this reason, she has captured the imagination of viewers throughout generations.

Girl with a Pearl Earring (Dutch: Meisje met de parel) is an oil painting by Dutch Golden Age painter Johannes Vermeer. It is a tronie of a girl wearing a headscarf and a pearl earring. The painting has been in the collection of the Mauritshuis in The Hague since 1902. In 2006, the Dutch public selected it as the most beautiful painting in the Netherlands.

The painting is a tronie, the Dutch 17th-century description of a 'head' that was not meant to be a portrait. It depicts a European girl wearing an exotic dress, an oriental turban, and an improbably large pearl earring. In 2014, Dutch astrophysicist Vincent Icke raised doubts about the material of the earring and argued that it looks more like polished tin than pearl on the grounds of the specular reflection, the pear shape and the large size of the earring.

After the most recent restoration of the painting in 1994, the subtle colour scheme and the intimacy of the girl's gaze toward the viewer have been greatly enhanced. During the restoration, it was discovered that the dark background, today somewhat mottled, was initially intended by the painter to be a deep enamel-like green. This effect was produced by applying a thin transparent layer of paint, called a glaze, over the present-day black background. However, the two organic pigments of the green glaze, indigo and weld, have faded.

On the advice of Victor de Stuers, who for years tried to prevent Vermeer's rare works from being sold to parties abroad, Arnoldus Andries des Tombe purchased the work at an auction in The Hague in 1881, for only two guilders with a thirty cents buyer's premium (around €24 at current purchasing power). At the time, it was in poor condition. Des Tombe had no heirs and donated this and other paintings to the Mauritshuis in 1902.

In 2012, as part of a traveling exhibition while the Mauritshuis was being renovated and expanded, the painting was exhibited in Japan at the National Museum of Western Art, Tokyo, and in 2013–2014 the United States, where it was shown at the High Museum in Atlanta, the de Young Museum in San Francisco and in New York City at the Frick Collection. Later in 2014 it was exhibited in Bologna, Italy. In June 2014, it returned to the Mauritshuis museum which stated that the painting will not leave the museum in the future.

The painting was investigated by the scientists of the Netherlands Institute for Cultural Heritage and FOM Institute for Atomic and Molecular Physics (AMOLF) Amsterdam.