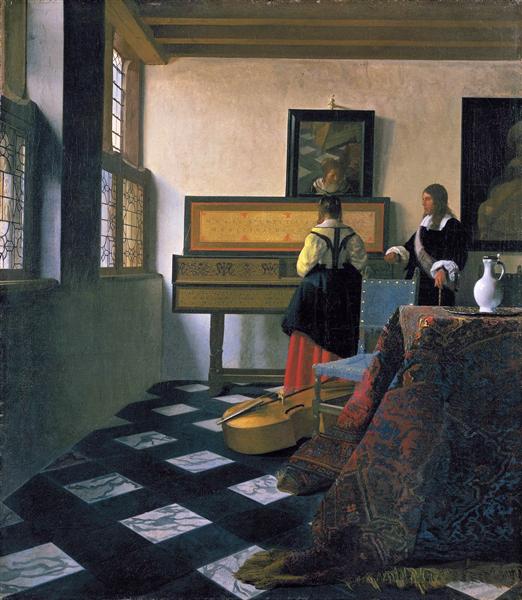 Music was an important theme in the art of Jan Vermeer, embodied in one of his well-known paintings, The music lesson. This type of scene was also painted by Vermeer’s contemporary, Frans van Mieris the Elder, a genre and portrait painter. In The Duet (1658), Mieris portrayed a damsel and gentleman making music together, while a servant brings over a drink and music book. In comparison to Mieris, Vermeer reduced the activity in the scene, but in doing so he added ambiguity to the nature of the event unfolding in the painting. Even though the title suggests that the lady playing the virginal is accompanied by her tutor, the iconography implies that the man in question could be a lover or a suitor.

Music is a metaphor for harmony and love, and the type of melodies played on the virginal celebrated love and the comfort it brings. The virginal was most likely produced by the famous Antwerp instrument maker Andreas Ruckers or inspired by his craftsmanship style. In Vermeer’s time, such a virginal would have been in a wealthy household, where young ladies could practice playing the refined instrument. On the lid of the virginal Vermeer placed a Latin inscription MUSICA LETIATIAE CO[ME]S/ MEDICINA DOLOR[IS], meaning ‘Music is a companion in pleasure and a balm in sorrow’. The inscription speaks of feelings of pleasure and solace, hinting that there is a romantic connection between the two figures.

Above the virginal is a mirror, which Vermeer cleverly used to reveal the young woman’s face. The reflection in the mirror corresponds with the young man’s gaze, who is attentively observing the woman playing. Vermeer also revealed his own presence by including part of his easel in the mirror reflection. By including the easel the artist reveals his position and gaze on the scene. It can be interpreted that as the man is enthralled with the woman playing, the artist is similarly absorbed in the process of painting.

On the back wall there is a painting portraying Roman Charity, the story of Cimon and his daughter Pero, who managed through love and devotion to save her father from a death sentence. Pero is considered an ideal of spiritual love and Christian charity. Right under the painting, there is a white jug, which can symbolize sensual nourishment. In this way, the iconography reinforces the overall theme of spiritual and sensual love. In the foreground the artist painted another instrument, a bass viol. Through infrared technology it is known that this was a later addition to the painting since Vermeer painted it over the floor tiles and the woman’s red dress. The two instruments are another element that suggests shared pleasures and potential harmony, and as such reflect the possible relationship between the young man and woman.

The Music Lesson or Lady at the Virginals with a Gentleman by Johannes Vermeer, is a painting of young female pupil receiving the titular music lesson.

The picture was sold in May 1696 in Delft, part of the collection of Jacob Dissous, which included many Vermeers. It was later acquired by Venetian artist Giovanni Antonio Pellegrini in 1718, with Pellegrini’s collection later being bought by Joseph Smith. The Music Lesson has been part of the Royal Collection of Great Britain since 1762, when King George III bought Smith's collection of paintings. When the painting was acquired it was believed to be a work by Frans van Mieris the elder because of a misinterpretation of the signature. It was not correctly attributed to Vermeer until 1866 by Théophile Thoré, though some scholars were skeptical whether it was Vermeer or not. It has at various times been kept at both Buckingham Palace and Windsor Castle, and is depicted in Charles Wild's Windsor Castle: the King's Closet, 1816, a watercolour prepared for William Pyne's History of the Royal Residences.

The painting was investigated by Hermann Kühn in 1968 and there is also material on the pigment analysis on the website of the National Gallery in London where the painting was included in the exhibition "Vermeer and Music: The Art of Love and Leisure" in 2013. The Music Lesson is a mature work of Vermeer and his handling of colour and his choice of painting materials is but one of the aspects proving his mastery. The painting is dominated by dark areas such as the bluish-black floor painted in bone black with addition of natural ultramarine.

The 2013 documentary film Tim's Vermeer documents inventor and entrepreneur Tim Jenison's attempt to recreate The Music Lesson to test his theory that Vermeer painted with the help of optical devices. Jenison is given the opportunity for a brief private viewing of the painting at Buckingham Palace. The film's claim that Vermeer used something similar to Jenison's technique has been derided by art critics Jonathan Jones and Bendor Grosvenor.