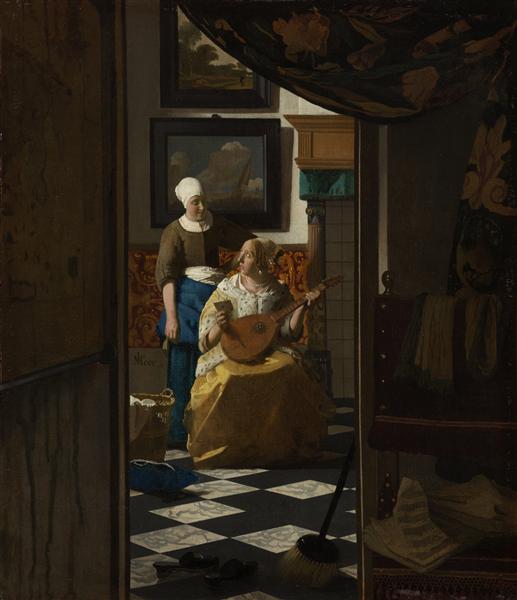 The Love Letter (Dutch: De liefdesbrief) is a 17th-century genre painting by Jan Vermeer. The painting shows a servant maid handing a letter to a young woman with a cittern. The painting is in the Rijksmuseum Amsterdam.

The tied-up curtain in the foreground creates the impression that the viewer is looking at an intensely private, personal scene. There is also an element of trompe l'oeil as Dutch paintings were often hung with little curtains to conserve them, and the device of painted curtains is seen in other Dutch works of the period. The diagonals on the chequered floor create the impression of depth and three-dimensionality. The fact that it is a love letter that the woman has received is made clear by the fact that she is carrying a lute (more specifically, a cittern, a member of the lute/guitar family). The lute was a symbol of love - often carnal love; luit was also a slang term for vagina. This idea is further reinforced by the slippers at the very bottom of the picture. The removed slipper was another symbol of sex. The floor brush would appear to represent domesticity, and its placement at the side of the painting may suggest that domestic concerns have been forgotten or pushed aside.

The colors blue and gold are important in the composition of the painting - the gold is located on the woman's dress, the top of the fireplace, and many of the objects, which complements the blue on the floor, the maid's dress, the picture frames, etc. Classical influence is also apparent in the ionic columns of the fireplace.

The two paintings on the wall are also significant. The lower painting is of a stormy sea, a clear metaphor for tempestuous love. Above it is a landscape painting of a traveler on a sandy road. This may refer to the absence of the man who is writing to the lady.

In the second half of the 17th century, the painting probably found its place in the collection of the Polish–Lithuanian Commonwealth's monarch John III Sobieski. The 1696 inventory of the Wilanów Palace in Warsaw lists among Dutch paintings "a painting of a lady, playing a lute in a golden robe, while a girl gives her a letter in the black frames (obraz damy, grającej na lutni w złotej szacie, a dziewczyna list jey oddaje w ramach czarnych)".

On September 23, 1971, the painting was stolen from its display at The Centre for Fine Arts, Brussels, where it was on loan from the Rijksmuseum. The thief, 21-year-old Mario Pierre Roymans, had locked himself in an electrical closet till the museum was closed. He then took the painting off the wall and tried to escape out of a window. However, when the frame failed to fit through the window, he cut the canvas from its frame with a potato peeler and hid the strip in his back pocket. Roymans first concealed the painting in his room at his place of work, The Soetewey (or Soete-Wey) Hotel. Later he buried it in a forest, but when it started to rain, he recovered it and hid it in his room inside his pillowcase.