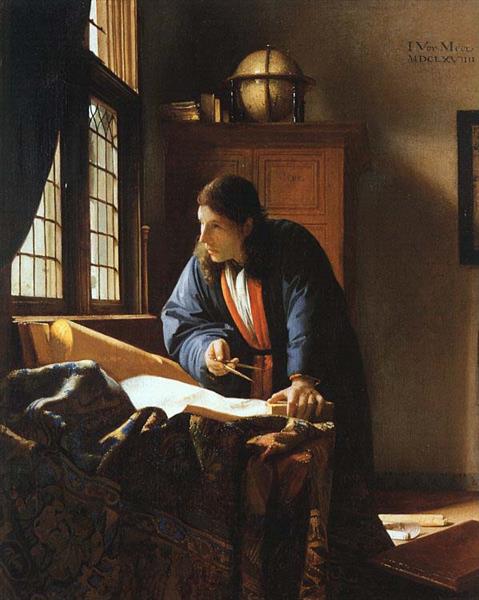 The Geographer is a painting created by Dutch artist Johannes Vermeer in 1668–1669, and is now in the collection of the Städelsches Kunstinstitut museum in Frankfurt, Germany. It is closely related to Vermeer's The Astronomer, for instance using the same model in the same dress, and has sometimes been considered a pendant painting to it. A 2017 study indicated that the canvas for the two works came from the same bolt of material.

This is one of only three paintings Vermeer signed and dated (the other two are The Astronomer and The Procuress).

The geographer, dressed in a Japanese-style robe then popular among scholars, is shown to be "someone excited by intellectual inquiry", with his active stance, the presence of maps, charts, a globe and books, as well as the dividers he holds in his right hand, according to Arthur Wheelock Jr. "The energy in this painting [...] is conveyed most notably through the figure's pose, the massing of objects on the left side of the composition, and the sequence of diagonal shadows on the wall to the right."

Vermeer made several changes in the painting that enhance the feeling of energy in the picture: the man's head was originally in a different position to the left of where the viewer now sees it, indicating the man perhaps was looking down, rather than peering out the window; the dividers he holds in his hand were originally vertical, not horizontal; a sheet of paper was originally on the small stool at the lower right, and removing it probably made that area darker.

Details of the man's face are slightly blurred, suggesting movement (also a feature of Vermeer's Mistress and Maid), according to Serena Carr. His eyes are narrowed, perhaps squinting in the sunlight or an indication of intense thinking. Carr asserts that the painting depicts a "flash of inspiration" or even "revelation". The drawn curtain on the left and the position of the oriental carpet on the table—pushed back—are both symbols of revelation. "He grips a book as if he's about to snatch it up to corroborate his ideas."

The globe was published in Amsterdam in 1618 by Jodocus Hondius. Terrestrial and celestial globes were commonly sold together, and the celestial globe in The Astronomer "was also a Hondius (Hendrick rather than Judocus)", another indication that the two paintings were created as pendant pieces, according to Cant. The globe is turned toward the Indian Ocean, where the Dutch East India Company was then active. Vermeer used an impasto technique to apply pointillé dots, not to indicate light reflected more strongly on certain points but to emphasize the dull ochre cartouche "frame" printed on the globe. Since the globe can be identified, we know the decorative cartouche includes a plea for information for future editions—reflecting the theme of revelation in the painting.

The cartographic objects surrounding the man are some of the actual items a geographer would have: the globe, the dividers the man holds, a cross-staff (hung on the center post of the window), used to measure the angle of celestial objects like the sun or stars, and the chart the man is using, which (according to one scholar, James A. Welu) appears to be a nautical chart on vellum. The sea chart on the wall of "all the Sea coasts of Europe" has been identified as one published by Willem Jansz Blaeu. This accuracy indicates Vermeer had a source familiar with the profession. The Astronomer, which seems to form a pendant with this painting, shows a similar, sophisticated knowledge of cartographic instruments and books, and the same young man modeled for both. That man himself may have been the source of Vermeer's correct display of surveying and geographical instruments, and possibly of his knowledge of perspective.