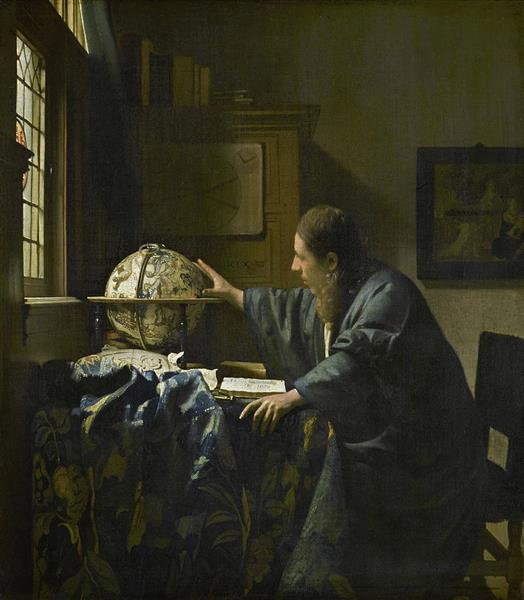 Portrayals of scientists were a favourite topic in 17th-century Dutch painting and Vermeer's oeuvre includes both this astronomer and the slightly later The Geographer. Both are believed to portray the same man, possibly Antonie van Leeuwenhoek. A 2017 study indicated that the canvas for the two works came from the same bolt of material, confirming their close relationship.

The astronomer's profession is shown by the celestial globe (version by Jodocus Hondius) and the book on the table, the 1621 edition of Adriaan Metius's Institutiones Astronomicae Geographicae. Symbolically, the volume is open to Book III, a section advising the astronomer to seek "inspiration from God" and the painting on the wall shows the Finding of Moses—Moses may represent knowledge and science ("learned in all the wisdom of the Egyptians").

The provenance of The Astronomer can be traced back to 27 April 1713, when it was sold at the Rotterdam sale of an unknown collector (possibly Adriaen Paets (nl) or his father, of Rotterdam) together with The Geographer. The presumed buyer was Hendrik Sorgh, whose estate sale held in Amsterdam on 28 March 1720 included both The Astronomer and The Geographer, which were described as ‘Een Astrologist: door Vermeer van Delft, extra puyk’ (An Astrologist by Vermeer of Delft, topnotch) and ‘Een weerga, van ditto, niet minder’ (Similar by ditto, no less).

Between 1881 and 1888 it was sold by the Paris art dealer Léon Gauchez to the banker and art collector Alphonse James de Rothschild, after whose death it was inherited by his son, Édouard Alphonse James de Rothschild. In 1940 it was seized from his hotel in Paris by the Nazi Einsatzstab Reichsleiter Rosenberg für die Besetzten Gebiete after the German invasion of France. A small swastika was stamped on the back in black ink. The painting was returned to the Rothschilds after the war, and was acquired by the French state as giving in payment of inheritance taxes in 1983 and then exhibited at the Louvre since 1983.