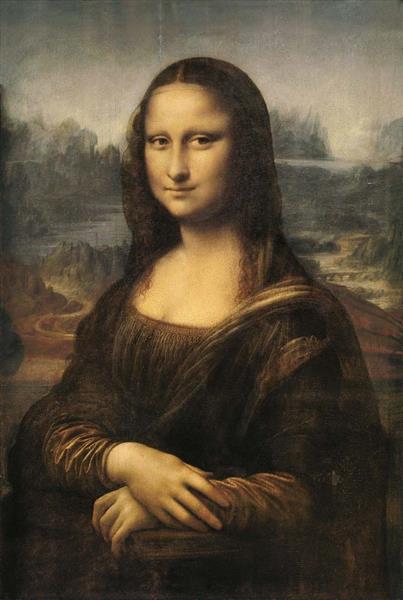 One of the most iconic and recognizable paintings in the world is the Mona Lisa (ca. 1503-1519) painted by Leonardo da Vinci. The unique appeal of the portrait lies in its enigmatic nature, Mona Lisa’s smile radiates mystery, sensuality and contentment. This was achieved through sfumato, Leonardo’s painting technique that softened the transition between colors. This depth and complexity of expression is the reason the Mona Lisa is regarded as the pinnacle of portraiture. The interest in the portrait was further amplified by its mysterious history: the identity of the sitter, who commissioned the painting, how long Leonardo worked on the portrait and how it entered the French royal collection are all topics of scholarly debate.

It is thought that the sitter was Lisa del Giocondo, the wife of a wealthy Florentine merchant Francesco del Giocondo. For this reason, the painting is sometimes called La Gioconda. The earliest identification of the painting was provided by the Renaissance art historian Giorgio Vasari. In Vasari’s 1550 biography of Leonardo, he wrote about the magnificent portrait of Lisa del Giocondo, which Leonardo worked on between 1503 and 1506. Many were skeptical of Vasari’s account; however, a 2005 discovery at the University of Heidelberg provided compelling new evidence that confirms Vasari’s assertion. In a volume written by the ancient philosopher Cicero from 1477, there was a handwritten marginal by Leonardo’s contemporary, the secretary and assistant to Niccolò Machiavelli, Agostino Vespucci. In the note dated October 1503, Vespucci praises Leonardo’s skill by comparing him to the Greek and painter Apelles, and states that Leonardo is working on a portrait of Lisa del Giacondo.

The Mona Lisa was the earliest example in Italian portraiture that portrayed the sitter in a half-length format. Leonardo presented a new artistic formula: the figure is shown at half-length sitting in armchair in front of a loggia - a gallery or room with one or more open sides. The incorporation of the loggia allowed Leonardo to present an imaginary landscape as the backdrop of the portrait. This significant innovation influenced Leonardo contemporaries: Raphael adopted the composition and pose in his portrait Young Woman with Unicorn (ca. 1506). Still it is important to note that Leonardo was indebted to Flemish portraiture of the second half of the 15th century, particularly the portraits of Hans Memling such as Portrait of Barbara van Vlaendenbergh (ca. 1470-1472) and Man with a Roman coin (ca. 1480).

Leonardo spent his final years in France, where his patron the King of France, Francis I, purchased Mona Lisa for the royal French collection. From 1797, the portrait is on permanent display at the Louvre and is the crown jewel of the museum collection. On the morning of August 22 1911, Louvre employees were shocked to discover that the painting was stolen the previous night. Two years later, Louvre employee Vincenzo Peruggia was identified as the thief. Peruggia claimed his motives were patriotic: he believed Leonardo’s masterpiece belonged in Italy and was caught trying to sell the painting in Florence. After its discovery, the Mona Lisa was exhibited throughout Italy before its celebratory return to the Louvre in 1914.

The Mona Lisa (/ˌmoʊnə ˈliːsə/; Italian: Monna Lisa [ˈmɔnna ˈliːza] or La Gioconda [la dʒoˈkonda], French: La Joconde [la ʒɔkɔ̃d]) is a half-length portrait painting by the Italian Renaissance artist Leonardo da Vinci that has been described as "the best known, the most visited, the most written about, the most sung about, the most parodied work of art in the world". The Mona Lisa is also one of the most valuable paintings in the world. It holds the Guinness World Record for the highest known insurance valuation in history at $100 million in 1962, which is worth nearly $800 million in 2017.

The painting is thought to be a portrait of Lisa Gherardini, the wife of Francesco del Giocondo, and is in oil on a white Lombardy poplar panel. It had been believed to have been painted between 1503 and 1506; however, Leonardo may have continued working on it as late as 1517. Recent academic work suggests that it would not have been started before 1513. It was acquired by King Francis I of France and is now the property of the French Republic, on permanent display at the Louvre Museum in Paris since 1797.

The subject's expression, which is frequently described as enigmatic, the monumentality of the composition, the subtle modelling of forms, and the atmospheric illusionism were novel qualities that have contributed to the continuing fascination and study of the work.

The title of the painting, which is known in English as Mona Lisa, comes from a description by Renaissance art historian Giorgio Vasari, who wrote "Leonardo undertook to paint, for Francesco del Giocondo, the portrait of Mona Lisa, his wife." Mona in Italian is a polite form of address originating as "ma donna" – similar to "Ma’am", "Madam", or "my lady" in English. This became "madonna", and its contraction "mona". The title of the painting, though traditionally spelled "Mona" (as used by Vasari), is also commonly spelled in modern Italian as Monna Lisa ("mona" being a vulgarity in some Italian dialects) but this is rare in English.

Vasari's account of the Mona Lisa comes from his biography of Leonardo published in 1550, 31 years after the artist's death. It has long been the best-known source of information on the provenance of the work and identity of the sitter. Leonardo's assistant Salaì, at his death in 1524, owned a portrait which in his personal papers was named la Gioconda, a painting bequeathed to him by Leonardo.

That Leonardo painted such a work, and its date, were confirmed in 2005 when a scholar at Heidelberg University discovered a marginal note in a 1477 printing of a volume written by the ancient Roman philosopher Cicero. Dated October 1503, the note was written by Leonardo's contemporary Agostino Vespucci. This note likens Leonardo to renowned Greek painter Apelles, who is mentioned in the text, and states that Leonardo was at that time working on a painting of Lisa del Giocondo.

In response to the announcement of the discovery of this document, Vincent Delieuvin, the Louvre representative, stated "Leonardo da Vinci was painting, in 1503, the portrait of a Florentine lady by the name of Lisa del Giocondo. About this we are now certain. Unfortunately, we cannot be absolutely certain that this portrait of Lisa del Giocondo is the painting of the Louvre."

c.1503-1506: Leonardo paints the portrait of Lisa, commissioned by her husband Francesco del Gicondo, at his studio in Florence, Italy.

1503: Agostino Vespucci witnesses Leonardo painting the portrait of Lisa del Giocondo, and suggests it will be intentionally left unfinished. He details this account in the now famous ‘Heidelberg Document’.

1504: Copying Leonardo’s portrait of Mona Lisa, Raphael makes a pen and ink sketch of a ‘Young Lady on a Balcony’, who is flanked by two columns.

1506: Leonardo departs for Milan quite suddenly at the request of Charles d’Amboise, leave the ‘Earlier Mona Lisa‘ unfinished, and likely takes it with him when he leaves Florence.

1513: Under the patronage of Giuliano de Medici in Rome, Leonardo is working on the Louvre ‘Mona Lisa‘, possibly using the ‘Earlier Mona Lisa‘ portrait of Lisa del Giocondo as a model.

1517: Antonio de Beatis accompanies the Cardinal off Aragon on a visit with Leonardo in Cloux, near Amboise, France, and is shown a finished portrait of:”… a certain Florentine lady … “, and records that the was commissioned by Giuliano de Medici. It is widely accepted that the portrait that he saw is the version of the Mona Lisa that is now hanging in the Louvre.

1518: A Royal receipt details the transaction, facilitated by Leonardo’s apprentice Salai, in which the Louvre ‘Mona Lisa‘ enters the French Royal Collection.

1525: Upon his death, an inventory of Salai’s possessions in Milan lists a high-valued painting as ‘La Honda‘, which is believed to be a short form for ‘La Gioconda‘, and is corrected as such in a later version of that inventory.

1550: Giorgio Vasari describes the portrait of Lisa del Giocondo as having been left unfinished in his compendium of biographies: The Lives of the Most Excellent Italian Painters, Sculptors and Architects (also known as the Vite).

1568: Vasari publishes a second, revised edition of his Vite nearly 20 years later, in which he again describes the painting as unfinished.

c. 1570-1770: During the turbulent times in Italy and France, no records of the painting’s whereabouts are uncovered.

1584: Gian Paolo Lomazzo notes two separate but similar paintings by Leonardo ‘La Gioconda‘ and a ‘Mona Lisa‘ in his Treatise on Pictures, Sculptures and Architecture’.

c.1778: The painting is believed to have been acquired in Italy by English nobleman James Thomas Benedictus Marwood, while making his ‘Grand Tour’, and brought to England as part of an art collection to be housed in his Somerset manor.

1858: An auction at Avishays House in Somerset, England, features ‘La Joconde‘ by Leonardo da Vinci. The same painting had been on exhibit at the Yeovil Fine Arts Exhibition two years prior.

1913: Hugh Blaker, art connoisseur and curator of the Holburne Museum in Bath, England, rediscovers the painting at the Somerset manor house of an aristocratic family. Blaker acquires the painting and brings it to his studio in Isleworth, London, where it becomes known as the ‘Isleworth Mona Lisa‘.

1914: The painting is sent to the United States for safekeeping during World War I. It is housed in the Boston Museum of Fine Arts until 1918.

1915: John R. Eyre, art historian and expert, writes a monograph on the painting, which is immediately published in London and New York.

1922-1926: Eyre follows up with a book on the painting, detailing ten reasons for recognising it as the earlier version of Mona Lisa by Leonardo da Vinci. In this book, he documents that the painting was brought to Rome in 1922 and was examined by Leonardo experts. Most of them confirmed its attribution to Da Vinci.

1936: Hugh Blaker dies. His sister Jane and Murray Urquart, his colleague and the executor of his estate, arrange the display of Blaker’s ‘Isleworth Mona Lisa‘ in an exhibition of his private collection of paintings at the Leicester Galleries in London.

1962: Old Master paintings specialist and collector, Dr. Henry Pulitzer, acquires the painting, the subject of his 1966 book, Where is the Mona Lisa?

1975: Pulitzer has the ‘Isleworth Mona Lisa‘ brought to Switzerland, where it is locked away in a bank vault.

1979: Henry Pulitzer dies, and the painting is bequeathed to his partner, Elizabeth Meyer.

1982: Internationally acclaimed French almanac, L’Encyclopédie Quid, acknowledges the existence of two versions of the Mona Lisa by Leonardo: The earlier version in a Swiss bank vault, and the later version in the Louvre, Paris. It continues to publish this same listing in subsequent years.

2008: Elizabeth Meyer dies, and the painting passes to an international consortium. The Mona Lisa Foundation is established as an institution, mandated to conduct all necessary research to determine if the ‘Earlier Mona Lisa‘ was painted by Leonardo. The initial research team consists of those that had been working on the painting since 2004.

2012: The Mona Lisa Foundation publishes the findings of 35 years of research and tests in its book Mona Lisa – Leonardo’s Earlier Version and releases these findings to the press and the public.

2014: The ‘Earlier Mona Lisa‘ begins a worldwide exhibition tour. The premiere opens at the Old Parliament with the support if the Singapore government agencies and the endorsement of the Singapore Arts Council.

2015: Professors Lorusso and Natali publish, in a peer-reviewed journal, a comprehensive review of Mona Lisa versions and copies and determine that the ‘Earlier Mona Lisa‘ and the Louvre ‘Mona Lisa‘ are original paintings by Da Vinci.

2016: The exhibition opens in Shanghai to large public and critical acclaim. Professors Asmus, Parfenov and Elford publish a peer-reviewed paper confirming to 99% certainty that Leonardo painted both the ‘Earlier Mona Lisa‘ and the Louvre ‘Mona Lisa.

2017: The Louvre Museum publishes a new book in which the author, Vincent Delieuvin states that Raphael and other copyists must have based their copies of the Mona Lisa on a version other than that in the Louvre today.