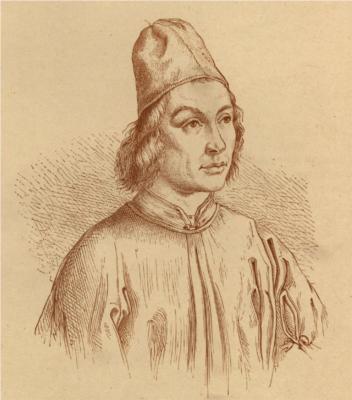 Hans Memling (also spelled Memlinc; c. 1430 – 11 August 1494) was a German painter who moved to Flanders and worked in the tradition of Early Netherlandish painting. He was born in the Middle Rhine region, and probably spent his childhood in Mainz. He had moved to the Netherlands by 1465 and spent time in the Brussels workshop of Rogier van der Weyden. He was subsequently made a citizen of Bruges, where he became one of the leading artists, painting both portraits and diptychs for personal devotion and several large religious works, continuing the style he learned in his youth. He became very successful, and in 1480 was listed among the wealthiest citizens in a city tax list.

He married Anna de Valkenaere sometime between 1470 and 1480, and they had three children. Memling's art was rediscovered, and became very popular, in the 19th century.

Born in Seligenstadt, near Frankfurt in the Middle Main region, Memling served his apprenticeship at Mainz or Cologne, and later worked in the Low Countries under Rogier van der Weyden (c. 1455–1460) in Brussels, Duchy of Brabant. He then worked at Bruges, County of Flanders by 1465.

He may have been wounded at the Battle of Nancy (1477), sheltered and cured by the Hospitallers at Bruges and to show his gratitude he refused payment for a picture he had painted for them. Memling did paint for the Hospitallers in 1479 and 1480, and it is likely that he was known to the patrons of St John prior to the Battle of Nancy. In 1477, when he was believed dead, he was under contract to create an altarpiece for the gild-chapel of the booksellers of Bruges. This altarpiece, Scenes of the Passion of Christ, now in the Galleria Sabauda of Turin, is not inferior in any way to those of 1479 in the Hospital of St. John, which for their part are hardly less interesting as illustrative of the master's power than The Last Judgment, which since the 1470s, is in the National Museum, Gdańsk. Critical opinion has been generally unanimous in assigning this altarpiece to Memling. This is evidence that Memling was a resident of Bruges in 1473; for the Last Judgment was likely painted and sold to a merchant at Bruges, who shipped it there on board a vessel bound to the Mediterranean which was captured by Danzig privateer Paul Beneke in that very year. The purchase of his pictures by an agent of the Medici demonstrates that he had a considerable reputation.

The oldest allusions to pictures connected to Memling point to his relations with the Burgundian court, which was held in Brussels. The inventories of Margaret of Austria, drawn up in 1524, allude to a triptych of the God of Pity by Rogier van der Weyden, of which the wings containing angels were painted by "Master Hans". He may have been apprenticed to van der Weyden in Bruges, where he afterwards dwelt.

The clearest evidence of the connection of the two masters is that afforded by pictures, particularly an altarpiece, which has alternately been assigned to each of them, and which may be due to their joint labours. In this altarpiece, which is a triptych ordered for a patron of the house of Sforza, we find the style of van der Weyden in the central panel of the Crucifixion, and that of Memling in the episodes on the wings. Yet the whole piece was assigned to the former in the Zambeccari collection at Bologna, whilst it was attributed to the latter at the Middleton sale in London in 1872.