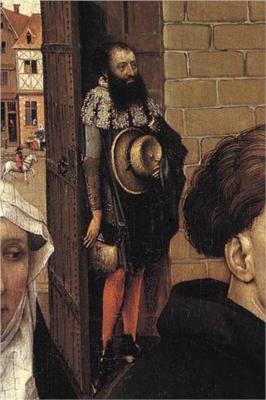 Robert Campin (c. 1375 – 26 April 1444), now usually identified with the Master of Flémalle (earlier the Master of the Merode Triptych, before the discovery of three other similar panels), was the first great master of Flemish and Early Netherlandish painting. Campin's identity and the attribution of the paintings in both the "Campin" and "Master of Flémalle" groupings have been a matter of controversy for decades. Campin was highly successful during his lifetime, and thus his activities are relatively well documented, but he did not sign or date his works, and none can be securely connected with him. A corpus of work attached to the unidentified "Master of Flémalle", so named in the 19th century after three religious panels said to have come from a monastery in Flémalle. They are each assumed to be wings of triptychs or polyptychs, and are the Virgin and Child with a Firescreen now in London, a panel fragment with the Thief on the Cross in Frankfurt, and the Brussels version of the Mérode Altarpiece.

Campin was active by 1406 as a master painter in Tournai, in today's Belgium, and became that city's leading painter for 30 years. He had attained citizenship by 1410, and may have studied under Jan van Eyck. His fame had spread enough by 1419 that he led a large and profitable workshop. He became involved in the revolt of the Brotherhoods in the early 1420s; this, along with an extra-marital affair with a woman named Leurence Pol, led to his imprisonment. Yet he maintained his standing and workshop until his death in 1444.

The early Campin panels shows the influence of the International Gothic artists the Limbourg brothers (1385 – 1416) and Melchior Broederlam (c. 1350 – c.1409), but display a realistic observation than any earlier artists, which he achieved through innovations in the use of oil paints. He was successful in his lifetime, and the recipient of a number of civic commissions. Campin taught both Rogier van der Weyden (named in these early records as Rogelet de la Pasture, a French version of his name) and Jacques Daret. He was a contemporary of Jan van Eyck, and they met in 1427. Campin's best known work is the Mérode Altarpiece of c 1425-28.

Campin first appears as settled in Tournai from the archives of 1405–6, as a free master of the guild of goldsmiths and painters, and there has been a lot of speculation about his origin and birthplace which is actually unknown, although he is sometimes listed as having been born in Valenciennes. In 1408 he had purchased the house that he had been leasing since 1406 near the Tournai Cathedral. In 1410 he bought into the full citizenship. Records show a large number of commissions from individuals and guilds, as well as from ecclesiastical and civic authorities. Campin owned several houses, purchased city bonds and invested in mortgages.

Between 1423 and 1429, the city government was dominated by the guilds. Campin was the deputy dean of the guild of goldsmiths and painters in 1423/24 and 1425. In 1427 he represented the guild on the city council. After restoration of the oligarchy of full citizens, the leaders of the guild regime, including Robert Campin, were brought to court. Campin was ordered to make a pilgrimage to Saint-Gilles and pay the fine.