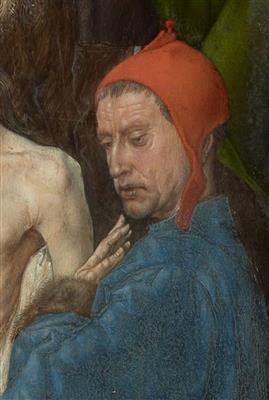 Hugo van der Goes (probably Ghent c. 1430/1440 – Auderghem 1482) was one of the most significant and original Early Netherlandish painters of the late 15th century. Van der Goes was an important painter of altarpieces as well as portraits. He introduced important innovations in painting through his monumental style, use of a specific colour range and individualistic manner of portraiture. The presence of his masterpiece, the Portinari Triptych in Florence, from the late-15th century onwards played a role in the development of realism in Italian Renaissance art.

Hugo van der Goes was likely born in Ghent or in the vicinity of Ghent around the year 1440. Nothing is known with certainty about the artist's life prior to 1467, the year in which he became a master in the painters' guild of Ghent. The sponsors for his membership of the guild were Joos van Wassenhove, master painter in Ghent from 1464, and Daneel Ruthaert. It is likely that he had trained elsewhere before he became a master in Ghent. Some historians have suggested that Dieric Bouts was possibly the master of van der Goes but there is no independent evidence for this.

In 1468 the artist was commissioned by the city of Ghent to execute some works in connection with the grant of the Great Indulgence of the city. More commissions from the city in the following years required van der Goes to create decorations for events such as papal blazons. In 1468 he was in the town of Bruges making decorations to celebrate the marriage between Charles the Bold and Margaret of York. Hugo van der Goes is recorded again on 18 October 1468 when he and other members of Ghent's painter's guild hosted painters from nearby Tournai at the guild's assembly in Ghent to celebrate St. Luke's day together. St. Luke was the patron saint of painters.

When in 1470 Joos van Wassenhove left Ghent for Italy to become the court painter of Federico da Montefeltro, the Duke of Urbino, van der Goes became the leading painter in Ghent. In 1473 the Burgundian court paid van der Goes for creating the blazons used at Charles the Good's funeral. The painter was repeatedly elected as deacon of the painter's guild of Ghent and served as its deacon from 1474 to 1476.

It was during this period that Hugo van der Goes painted the Adoration of the Magi (also known as the Monforte Altarpiece (Gemäldegalerie, Berlin)) and worked on the commission of Tommaso Portinari for the Portinari Altarpiece (Uffizi, Florence), which arrived at its destination in Florence only in 1483, when the artist had already died.