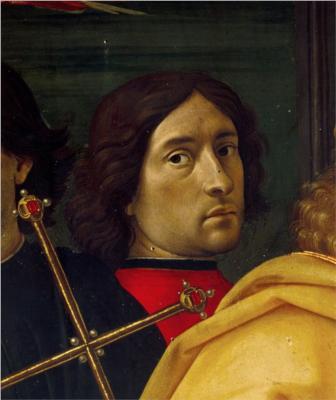 Domenico Ghirlandaio (Italian: [doˈmeːniko ɡirlanˈdaːjo]; 2 June 1448 – 11 January 1494) was an Italian Renaissance painter born in Florence. Ghirlandaio was part of the so-called "third generation" of the Florentine Renaissance, along with Verrocchio, the Pollaiolo brothers and Sandro Botticelli. Ghirlandaio led a large and efficient workshop that included his brothers Davide Ghirlandaio and Benedetto Ghirlandaio, his brother-in-law Bastiano Mainardi from San Gimignano, and later his son Ridolfo Ghirlandaio. Many apprentices passed through Ghirlandaio's workshop, including the famous Michelangelo. Ghirlandaio's particular talent lay in his ability to posit depictions of contemporary life and portraits of contemporary people within the context of religious narratives, bringing him great popularity and many large commissions.

Ghirlandaio was born Domenico di Tommaso di Currado di Doffo Bigordi. He was the eldest of six children born to Tommaso Bigordi by his first wife Antonia di ser Paolo Paoli; of these, only Domenico and his brothers and collaborators Davide and Benedetto Ghirlandaio survived childhood. Tommaso had two more children by his second wife, also named Antonia, whom he married in 1464. Domenico's half-sister Alessandra (b. 1475) married the painter Bastiano Mainardi in 1494. Both Ghirlandaio's father and his uncle, Antonio, were setaiuolo a minuto (dealers of silks and related objects in small quantities).

Giorgio Vasari reported that Domenico was at first apprenticed to his father, who was a goldsmith. The nickname "Il Ghirlandaio" (garland-maker) came to Domenico from his father, who was famed for creating the metallic garland-like headdresses worn by Florentine women. According to Vasari, Domenico made portraits of the passers-by and visitors to the shop: "when he painted the country people or anyone who passed through his studio he immediately captured their likeness". He was eventually apprenticed to Alesso Baldovinetti to study painting and mosaic. According to the art historian Günter Passavent, he was apprenticed in Florence to Andrea del Verrocchio. He maintained a close association with other Florentine painters including Botticelli and with the Umbrian painter Perugino.

Ghirlandaio excelled in the painting of frescos and it is for his fresco cycles that he is best known. An early commission came to him in the 1470s from the Commune of San Gimignano to decorate the Chapel of Santa Fina in the Collegiate Church of that city. The frescos, executed from 1477 to 1478, depict two miraculous events associated with the death of Saint Fina.

In 1480, Ghirlandaio painted St. Jerome in His Study as a companion piece to Botticelli's Saint Augustine in His Study in the Church of Ognissanti, Florence. He also painted a life-sized Last Supper in its refectory. From 1481 to 1485, he was employed on frescoes at the Palazzo Vecchio, painting among other works an Apotheosis of St. Zenobius (1482) in the Sala del Giglio, an over-life-sized work with an elaborate architectural framework, figures of Roman heroes, and other secular details, striking in its perspective and compositional skill.

In 1483, Ghirlandaio was summoned to Rome by Pope Sixtus IV as one of a team of Florentine and Umbrian painters who he commissioned to create a series of frescos of the lives of Jesus and Moses around the walls of the Sistine Chapel. Ghirlandaio painted the Vocation of the Apostles. He also painted the now lost Resurrection of Christ. The Crossing of the Red Sea has also been attributed to him, but is consistent with the style of Cosimo Roselli who was also part of the commission. Ghirlandaio is known to have created other works in Rome, now lost. His future brother-in-law, Sebastiano Mainardi, assisted him with these commissions and in the early frescoes at San Gimignano where Mainardi is now thought to have painted an Annunciation sometimes attributed to Ghirlandaio.