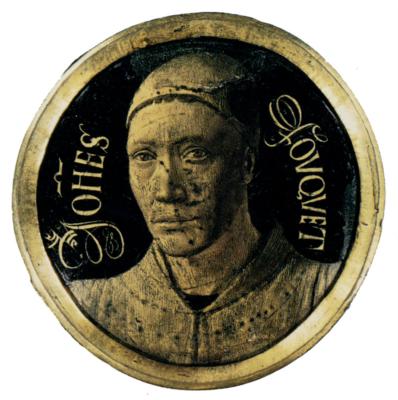 Jean (or Jehan) Fouquet (1420–1481) was a preeminent French painter of the 15th century, a master of both panel painting and manuscript illumination, and the apparent inventor of the portrait miniature. He was the first French artist to travel to Italy and experience first-hand the early Italian Renaissance.

He was born in Tours. Little is known of his life, but it is certain that he was in Italy before 1447, when he executed a portrait of Pope Eugene IV, who died that year (the portrait survives only in much-later copies).

Upon his return to France, while retaining his purely French sentiment, he grafted the elements of the Tuscan style, which he had acquired during his period in Italy, upon the style of the Van Eycks, forming the basis of early 15th-century French art and becoming the founder of an important new school.

He worked for the French court, including Charles VII, the treasurer Étienne Chevalier, and the chancellor Guillaume Jouvenel des Ursins. Near the end of his career, he became court painter to Louis XI.

His work can be associated with the French court's attempt to solidify French national identity in the wake of its long struggle with England in the Hundred Years' War.

One example is when Fouquet depicts Charles VII as one of the three magi. This is one of the very few portraits of the king. According to some sources, the other two magi are the Dauphin Louis, future Louis XI, and his brother.

Fouquet's excellence as an illuminator, his precision in the rendering of the finest detail, and his power of clear characterization in work on this minute scale secured his eminent position in French art. His importance as a painter was demonstrated when his portraits and altarpieces were for the first time brought together from various parts of Europe for the exhibition of the "French Primitives" held at the Bibliothèque Nationale in Paris.

Far more numerous are his illuminated books and miniatures. The Musée Condé in Chantilly contains forty miniatures from the Hours of Étienne Chevalier, painted in 1461 for Chevalier. Fouquet also illuminated a copy of the Grandes Chroniques de France, for an unknown patron, thought to be either Charles VII or someone else at the royal court. Also from Fouquet's hand are eleven of the fourteen miniatures illustrating a translation of Josephus at the Bibliothèque Nationale. The second volume of this manuscript, unfortunately with only one of the original thirteen miniatures, was discovered and bought in 1903 by Henry Yates Thompson at a London sale, and restored by him to France.

The Melun Diptych. One of Fouquet's most important paintings is the Melun Diptych (c. 1450), formerly in Melun cathedral. The left wing of the diptych depicts Étienne Chevalier with his patron saint St. Stephen, and is now in the Gemäldegalerie, Berlin. The right wing shows a pale Virgin and Child surrounded by red and blue angels and is now at the Royal Museum of Fine Arts, Antwerp. Since at least the seventeenth century, the Virgin has been recognized as a portrait of Agnès Sorel.