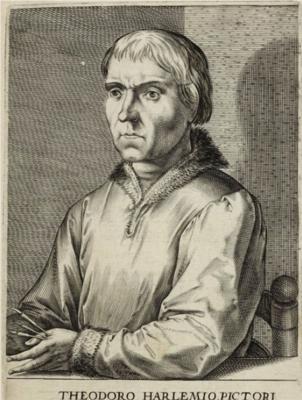 Very little is known about Bouts' early life, but he was greatly influenced by Jan van Eyck and by Rogier van der Weyden, under whom he may have studied. He is first documented in Leuven in 1457 and worked there until his death in 1475.

Bouts was among the first northern painters to demonstrate the use of a single vanishing point (as illustrated in his Last Supper). His work has a certain primitive stiffness of drawing, and his figures are often disproportionately long and angular, but his pictures are highly expressive, well designed and rich in colour, with especially good landscape backgrounds.

Bouts' earliest work is the Triptych of the Virgin's Life in the Prado (Madrid), dated to about 1445. The Deposition Altarpiece in Granada (Capilla Real) probably also dates to this period, around 1450–60. A dismembered canvas altarpiece—now in the Musées Royaux des Beaux-Arts de Belgique (Brussels), the J. Paul Getty Museum (Los Angeles), National Gallery (London), Norton Simon Museum (Pasadena), and a Swiss private collection—with the same dimensions as the Altarpiece of the Holy Sacrament may belong to this period. The Louvre Lamentation (Pietà) is another early work.

The Last Supper is the central panel of Altarpiece of the Holy Sacrament, commissioned from Bouts by the Leuven Confraternity of the Holy Sacrament in 1464. All of the central room's orthogonals (lines imagined to be behind and perpendicular to the picture plane that converge at a vanishing point) lead to a single vanishing point in the center of the mantelpiece above Christ's head. However the small side room has its own vanishing point, and neither it nor the vanishing point of the main room falls on the horizon of the landscape seen through the windows. The Last Supper is the second dated work (after Petrus Christus' Virgin and Child Enthroned with St. Jerome and St. Francis in Frankfurt, dated 1457) to display an understanding of Italian linear perspective.

Scholars also have noted that Bouts's Last Supper was the first Flemish panel painting to depict the Last Supper. In this central panel, Bouts did not focus on the biblical narrative itself but instead presented Christ in the role of a priest performing the consecration of the Eucharistic host from the Catholic Mass. This contrasts strongly with other Last Supper depictions, which often focused on Judas's betrayal or on Christ's comforting of John. Bouts also added to the complexity of this image by including four servants (two in the window and two standing), all dressed in Flemish attire. Although once identified as the artist himself and his two sons, these servants are most likely portraits of the confraternity's members responsible for commissioning the altarpiece. The Last Supper was the central part of the altarpiece in the St. Peter's Church, Leuven.

The Altarpiece of the Holy Sacrament has four additional panels, two on each side. Because these were taken to the museums in Berlin and Munich in the 19th century, the reconstruction of the original altarpiece has been difficult. Today it is thought that the panel with Abraham and Melchizedek is above the Passover Feast on the left wing, while the Gathering of the Manna is above Elijiah and the Angel on the right wing. All of these are typological precursors to the Last Supper in the central panel.