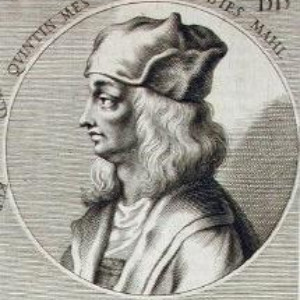 Quentin Massys (Dutch: Quinten Matsijs) (1466–1530) was a painter in the Flemish tradition and a founder of the Antwerp school. He was born at Leuven, where legend states he was trained as an ironsmith before becoming a painter. Matsys was active in Antwerp for over 20 years, creating numerous works with religious roots and satirical tendencies.

Most early accounts of Massys' life are composed primarily of legend and very little contemporary accounts exist of the nature of his activities or character. According to J. Molanus' Historiae Lovaniensium Massys is known to be a native of Leuven with humble beginnings as an ironsmith. One of four children, Massys was born to Joost Matsys (d. 1483) and Catherine van Kincken sometime between 4 April and 10 September 1466. Legend states that Matsys abandoned his career as a blacksmith to woo his wife, who found painting to be a more romantic profession, though Karel van Mander claimed this to be false, and the real reason was a sickness during which he was too weak to work at the smithy and instead decorated prints for the carnival celebrations. Documented donations and possessions of Joost Matsys indicate that the family had a respectable income and that financial need was most likely not the reason Matsys turned to painting. During the period in which Matsys was active in Antwerp he took only four apprentices: Arian van Overbeke (master 1501, inscribed 1495), Willem Muelenbroec (inscribed 1501), Eduart Portugalois (master 1506, inscribed 1504), and Hennen Boeckmakere (inscribed 1510). It is widely believed that Joachim Patinir studied with Matsys at some point during his career and contributed to several of his landscapes. Lack of guild records during this time leaves Matsys' travels to Italy and other parts of the Low Countries as part of his training open to question. For the most part, foreign influences on Matsys are inferred from his paintings and are considered to be a large portion of the artist's training during the 16th century.

During the greater part of the 15th century, the centres in which the painters of the Low Countries most congregated were Tournai, Bruges, Ghent and Brussels. Leuven gained prominence toward the close of this period, employing workmen from all of the crafts including Matsys. Not until the beginning of the 16th century did Antwerp take the lead which it afterward maintained against Bruges, Ghent, Brussels, Mechelen and Leuven. Because no guild records were kept prior to 1494 in Leuven there is no concrete proof that Matsys attained his master's status there; however, historians generally accept this to be the location of his early training because he had not been previously registered in Antwerp as an apprentice. As a member of Antwerp's Guild of Saint Luke, Matsys is considered to be one of its first notable artists. Existing records of guild laws and regulations from the 16th century indicate that it is highly unlikely that Matsys was self-taught, despite accounts in Carel van Mander's Schilderboeck (1604) stating that Matsys studied under no artist.