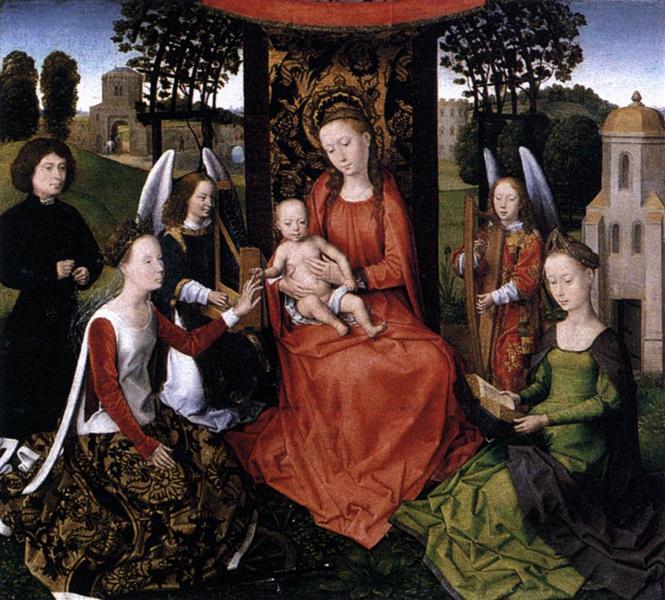 The Mystic Marriage of St. Catherine (or Virgin and Child with Saints Catherine of Alexandria and Barbara) is a c. 1480 oil-on-oak painting by the Early Netherlandish painter Hans Memling, now in the Metropolitan Museum of Art, New York. The panel shows an enthroned Virgin holding the Child. St Catherine of Alexandria and St Barbara are seated alongside. Angels playing instruments flank the throne, while the left hand male figure is presumably the donor. The scene is set before a landscape.

Intended as a devotional donor portrait, the panel combines elements of a Hortus conclusus, sacra conversazione and Virgo inter Virgines – the latter of which always presents Mary with Saints Catherine and Barbara. The work is characteristic of Memling's serene style, with structure and colors in harmony. The painting reflects techniques Memling probably learned from his predecessors Rogier van der Weyden, to whom he was almost certainly apprenticed, and Jan van Eyck, synthesizing elements of the earlier artists' work.

The composition is an almost exact copy of Memling's central panel in the St John Altarpiece. It is unknown when Memling painted the Mystic Marriage; 1480 seems a probable date according to tree ring analysis. The arbor arching over the Virgin's throne was added at a later date, probably in the 16th century.

The painting depicts the Virgin and Child flanked by saints and angels; the donor kneels to the left of the holy figures. The Virgin sits on a throne beneath a baldachin (canopy of honor) of rich brocade with the child on her lap. In the garden behind her emblem, an iris, is visible. Two angels dressed in liturgical garments with musical instruments stand to either side of the throne; the one to the left plays a portable organ and the one on right plays a harp. The martyr virgin saint, St Catherine of Alexandria kneels in front of Mary to the left; opposite is St Barbara, who sits to the right, reading a missal. The donor kneels behind St Catherine, a set of rosary beads in his hands. Attached to his hip, barely visible, is either a small purse or a coat-of-arms.

St Catherine was highly venerated in the Middle Ages, second only in popularity to the Magdelen. Emperor Maxentius tortured Catherine on an iron-spiked wheel and later, when she proclaimed herself married to Christ, cut off her head. According to her legend the mystic marriage occurred in a dream from which she awoke with a ring on her finger. Her emblems are the breaking wheel and sword, seen in the foreground, peeking out from beneath the voluminous folds of her ermine-lined skirt.

To denote her royal birth, Catherine wears a crown on her head and is dressed in rich clothing – a white tabard, red velvet sleeves, and a richly patterned brocade skirt. She extends her left hand to the Christ Child who places the ring on her finger, symbolizing their spiritual or mystical betrothal. James Snyder writes that typical of Memling's art, "the drama of the moment is in no way reflected by the expressions on the faces of the participants."