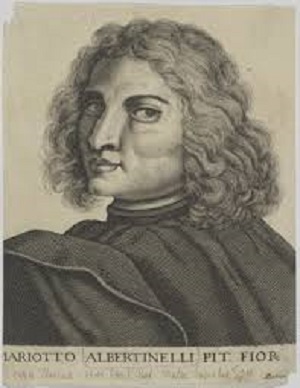 Mariotto Albertinelli, in full Mariotto di Bigio di Bindo Albertinelli (13 October 1474 – 5 November 1515) was an Italian Renaissance painter of the Florentine school. He was a close friend and collaborator of Fra Bartolomeo and their joint works appear as if they have been painted by one hand.


His work shows the influence of Perugino, Piero di Cosimo and Lorenzo di Credi as well as of Flemish painting. Some of Albertinelli's works reveal an eccentrically archaic tendency while others show a return to conventions of the early Renaissance.


Mariotto Albertinelli was born in Florence as the son of a gold beater. He was an only child and his mother died when he was just five years old. He was himself trained as a gold beater until the age of 12 when he became a pupil of Cosimo Rosselli and a fellow-pupil with Fra Bartolomeo. The two pupils formed such a close friendship that in 1494 they started a joint studio in Florence. After a while Albertinelli had mastered Fra Bartolomeo’s technique to such extent that he could paint in a style that blended with that of his partner. The closeness in style was such that for many years some doubts remained over who had painted certain works. For example, the Kress tondo, now in the Columbia Museum of Art was previously attributed to Fra Bartolomeo but is now thought to be the work of Albertinelli using the former's cartoon.


From around 1500 Fra Bartolomeo renounced painting for a few years in the wake of Savonarola's morality campaign. He joined the Dominican order as Fra Bartolomeo. Albertinelli then worked as an independent painter. He received various commissions including in 1503 for the high altarpiece for the Chapel of Congregazione di San Martino (later Church of Santa Elisabetta) in Florence (now in the Uffizi). The central panel depicts the Visitation and the predella the Circumcision, the Adoration of the Child and the Annunciation. The subject depicts the story in the Gospel of Luke when Elizabeth, the cousin of the Virgin Mary visits Mary, who is, like herself, pregnant. Elizabeth features prominently in this episode and this subject was therefore chosen for a church dedicated to her. While the figural composition of the Visitation was derived from designs by Fra Bartolomeo, Albertinelli changed elements in these designs by replacing Fra Bartolomeo’s strong contrasts in light and dark with smoother gradations of tone. The work also shows the influence of Perugino in its use of soft highlights and its inclusion of a classical arcade.