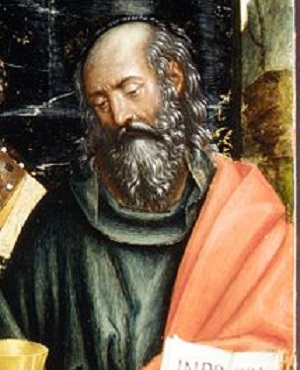 Defendente Ferrari (c. 1480/1485 – c. 1540) was an Italian painter active in Piedmont. His work marks the transition from late Gothic traditions to Renaissance art in the region.

Ferrari was born at Chivasso, near Turin. Here he trained and initially worked in the workshop of Giovanni Martino Spanzotti. Spanzotti had been the pre-eminent painter in western Piedmont after moving to Chivasso c. 1502. Many works previously thought to have been by Spanzotti are now attributed to Defendente.

Defendente achieved considerable success as a painter of polyptychs and altarpieces. He painted a number of nocturnal scenes such as the Nativity in Nocturnal Light (1510, Museo Civico d'Arte Antica di Torino).

He left a number of signed and dated works. His work developed away from its initial harsh style following Gothic traditions towards the use of more fluid brushstrokes and the creation of soft, dense highlights more in line with Renaissance painting. His style seems to indicate that he may have known the work of northern European artists such as Rogier van der Weyden, while his later work shows the influence of Macrino d'Alba.