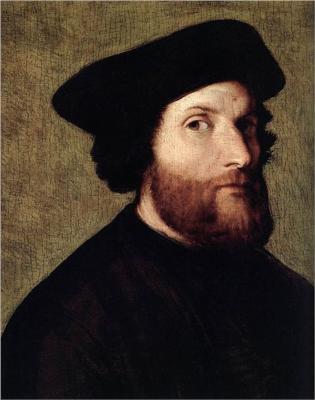 Lorenzo Lotto (c. 1480 – 1556/57) was an Italian painter, draughtsman and illustrator, traditionally placed in the Venetian school, though much of his career was spent in other North Italian cities. He painted mainly altarpieces, religious subjects and portraits. While he was active during the High Renaissance, his nervous and eccentric posings and distortions represent a transitional stage to the first Florentine and Roman Mannerists of the 16th century.

During his lifetime Lorenzo Lotto was a well respected painter and certainly popular in Northern Italy; he is traditionally included in the Venetian School, but his independent career actually places him outside the Venetian art scene. He was certainly not as highly regarded in Venice as in the other towns where he worked, for he had a stylistic individuality, even an idiosyncratic style and, after his death, he gradually became neglected and then almost forgotten; this could be attributed to the fact that his oeuvre now remains in lesser known churches or in provincial museums.

Little is known of his training. As a Venetian he was influenced by Giovanni Bellini as he had a good knowledge of contemporary Venetian painting. Though Bellini was doubtless not his teacher, the influence is clear in his early painting Virgin and Child with St. Jerome (1506) (National Gallery of Scotland, Edinburgh). However, in his portraits and in his early painting Allegory of Virtue and Vice (1505) (National Gallery of Art, Washington) he shows the influence of Giorgione's Naturalism. As he grew older his style changed, perhaps evolving, from a detached Giorgionesque classicism, to a more vibrant dramatic setpiece, more reminiscent of his contemporary from Parma, Correggio.

Lotto soon left Venice, because there the competition for a young painter would have been too great, with established names such as Giorgione, Palma the Elder and certainly with Titian. Nevertheless, Giorgio Vasari mentions in the third part of his book Vite that Lotto was a friend of Palma the Elder. In Treviso, a prospering town within the domain of the republic of Venice, he came under the patronage of bishop Bernardo de' Rossi. The already mentioned painting Allegory of Virtue and Vice was intended as an allegorical cover of his portrait (1505) of the bishop (now in National Museum of Capodimonte in Naples), who had survived an assassination attempt. The painting St. Jerome in the Desert (1500 or 1506) (Louvre, Paris) shows his youthful inexperience as a draughtsman, however the dramatic rocky landscape is accentuated by the red garment of the saint, while at the same time giving an early impression of his skill as a miniaturist. He painted his first altarpieces for the parish church San Cristina al Tiverone (1505) and the baptistery of the Cathedral of Asolo (1506), both still on display in those churches.

In 1508 he began the Recanati Polyptych altarpiece for the church of San Domenico; this two-tiered and rather conventionally painted polyptych consists of six panels. His portrait Young Man against a White Curtain in the Kunsthistorisches Museum, Vienna (c. 1506) and Adoration of the Child (c. 1508) in the National Museum in Kraków with Catherine Cornaro, Queen of Cyprus portraited as Saint Catherine, are paintings from this period. As he became a respected painter, he came to the attention of Bramante the papal architect, who was passing through Loreto (a pilgrimage site near Recanati). Lorenzo Lotto was invited to Rome to decorate the papal apartments, but nothing survives of this work, as it was destroyed a few years later. This was probably because he had imitated the style of Raphael, a rapidly rising star in the Papal court; indeed he had done it before, in the Transfiguration of the Recanati polyptych.