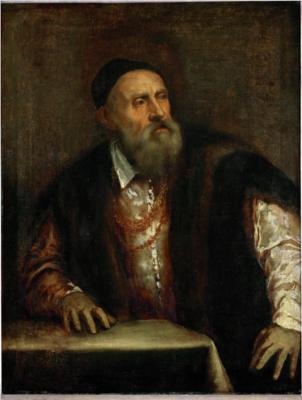 Titian was the greatest painter of 16th-century Venice, and the first painter to have a mainly international clientele. During his long career, he experimented with many different styles of painting that embody the development of art during his epoch.

Titian was born in Pieve di Cadore, a small town at the foot of the Dolomites on the Venetian side of the Alps. When he was about ten years old, Titian arrived in Venice, then one of the wealthiest and most cosmopolitan cities in the world. He started his artistic training in the workshop of the mosaicist Sebastiano Zuccato. He later briefly joined Gentile Bellini's workshop. After Gentile died in 1507, Titian joined the workshop of Gentile's brother, Giovanni Bellini, which at that time was the most important in Venice.
However, it was through contact with Giorgione, who had also previously trained in Giovanni Bellini's workshop, that he mainly developed his early style. The Giorgionesque appearance of Titian's early work, which is characterized by a pastoral mood, is proof of their closeness. In 1508-9, they worked together on the decoration of the external walls of the Fondaco dei Tedeschi in Venice. The parts executed by Titian were greatly praised by contemporaries, much to the annoyance of Giorgione. After Giorgione's death in 1510, and Sebastiano del Piombo's departure to Rome in 1511, Titian launched his independent career in Venice. He was now left without rivals among his generation.

In 1511 Titian painted his celebrated frescoes in the Scuola del Santo in Padua. His style had now reached maturity, marked by the fullness of forms, compositional confidence, and chromatic balance. These features made his work fundamental to the development of Venetian – and also European – painting. He became famous as a portraitist. He was also known as a painter of various profane subjects. These skills drew the attention of intellectually ambitious Italian dukes and aristocrats. Titian was commissioned to paint prestigious public religious paintings. His Venetian success was sealed by the execution of the altarpiece for the high altar of the important Franciscan church of Santa Maria Gloriosa dei Frari in Venice. The so-called Assunta or Assumption of the Virgin Mary, which is nearly seven meters high, was displayed in 1518, creating a revolutionary watershed in Venetian altarpiece design. Between 1519 and 1526, he painted the celebrated Pala Pesaro for the same church. This asymmetrical composition strongly influenced Venetian altarpiece painting right up until the 18th century.

Early in 1516, Titian started his professional relationship with Alfonso I d'Este, Duke of Ferrara, and spent time in Alfonso's castle. The duke wanted to create a personal cabinet, which would be known as the camerino d'alabastro (the alabaster cabinet), with mythological scenes derived from classical poetry. The duke employed the painters he considered to be the best at the time. Apart from Titian, the other artists were Raphael, Fra Bartolomeo, and Dosso Dossi. Following the deaths of Raphael and Fra Bartolomeo, Titian's involvement in the project increased. He then executed his famous Bacchanal for Alfonso I, along with Bacchus and Ariadne.

Titian also worked for the court of Mantua. In 1523 he began painting for the future Duke of Mantua, Federico II Gonzaga, the son of Isabella d'Este (who was the sister of Titian's earlier patron Alfonso I). Titian mainly painted portraits for the Mantuan court. In 1532, he started to work for the Duke of Urbino, Francesco Maria della Rovere. He would also work for his successor, Guidobaldo II. In the 1530s, he was also in touch with the court of Pope Paolo III Farnese.

The 1520s were hugely significant for Titian's private life. In 1525 he married Cecilia (who tragically died in 1530). Titian and Cecilia had three children, who were all given the names of famous figures from ancient Rome: Pompeo, Orazio, and Lavinia.

Titian's meeting with the Holy Roman Emperor Charles V in Bologna in 1530 would be a determining event in his life. On this occasion, Titian executed a (now lost) full-length, life-size portrait of the Emperor - an early example of what was still an extremely innovative genre at that time. He rapidly became the principal painter to the imperial court, which gave him immense privileges, honors, and even titles. From this moment, he was the painter most in demand at courts across Europe. Titian also became the official painter of Charles V's son, Philip II of Spain. Starting in about 1551, he painted the celebrated mythological series of pictures for Philip, which he referred to as poesie.

In 1527 the Florentine sculptor and architect Jacopo Sansovino and the Tuscan man of letters Pietro Aretino arrived in Venice. They became inseparable friends with Titian, stimulating his interest in Mannerism, a style first seen in his paintings from that period. Mannerist aspects of his art increased after his only trip to Rome in 1545-6, where he finally got the opportunity to meet Michelangelo.

The last phase of Titian's life coincided with a radical revision of his style and painting technique. Starting from the late 1550s, Titian developed a much freer use of the brush and a less descriptive representation of reality.
In the late 1560s and early 1570s, when Titian was already extremely old, he pushed his art to the edge of abstraction. This later style has been defined as 'magic impressionism.' All of this is well represented by two of his latest works, The Death of Actaeon (1575), and the 'Pietà (1576).
The 'Pietà' was originally destined for his own tomb in the church of Santa Maria Gloriosa dei Frari, where Titian was buried after dying of the plague in 1576.

Titian was most famous for his bold utilization of color, particularly in his earlier work, and he achieved this through seeking out rare pigments and using them in their richest and most saturated form, as well as by carefully balancing each color with those alongside it to create a harmonious overall impression. He also concentrated on the effect of light on color harnessing lighting effects, including chiaroscuro, to emphasize contrasting hues. Through this focus, he created the distinction between Venetian and Florentine art (Renaissance artists in Florence and Rome believed that line was paramount, the Venetian Renaissance style was defined by color and led by Titian).

The artist's later work is characterized by loose brush strokes and an expressive application of paint and it is likely that, at times, he used his fingers as well as brushes to apply and blend paint. In painting in this manner, Titian created a fluidity that lent a greater sense of movement and emotion to his work and was unique amongst his peers.

Titian worked almost exclusively in oil, which was a new technique at the start of his career. The medium allowed him to build up a series of glazes to depict the appearance and texture of the human form with accuracy, delicacy, and softness, which was innovative. This realism was particularly relevant in his renderings of female nudes, which were unusually sexually suggestive for the period and which seem to reflect Titian's desires.

Titian inspired a number of his contemporaries with his Mannerist style, particularly those who formed part of his workshop, including Paris Bordone, Bonifazio Veronese, and Polidoro da Lanciano as well as his nephew Marco Vecellio. It has also been suggested that he employed El Greco in his later years, influencing his famously vibrant use of color. Masters such as Rubens, Rembrandt, and Tintoretto show a debt to Titian in terms of composition, color, and use of looser brushstrokes.

Artists returned to Titian in the 18th and 19th centuries. Sir Joshua Reynolds was so fascinated by his work that he scraped away layers of paint on a canvas that he owned to discover Titian's processes and techniques. Neoclassicist, Jean Auguste Dominique Ingres and French Impressionists including Manet drew inspiration from the artist's later, freer canvases.

Tiziano Vecelli or Tiziano Vecellio (pronounced [titˈtsjaːno veˈtʃɛlljo]; c. 1488/1490 – 27 August 1576), known in English as Titian /ˈtɪʃən/, was an Italian painter, the most important member of the 16th-century Venetian school. He was born in Pieve di Cadore, near Belluno (in Veneto, Republic of Venice). During his lifetime he was often called da Cadore, taken from the place of his birth.

Recognized by his contemporaries as "The Sun Amidst Small Stars" (recalling the famous final line of Dante's Paradiso), Titian was one of the most versatile of Italian painters, equally adept with portraits, landscape backgrounds, and mythological and religious subjects. His painting methods, particularly in the application and use of colour, would exercise a profound influence not only on painters of the Italian Renaissance, but on future generations of Western art.

His career was successful from the start, and he became sought after by patrons, initially from Venice and its possessions, then joined by the north Italian princes, and finally the Habsburgs and papacy.

During the course of his long life, Titian's artistic manner changed drastically, but he retained a lifelong interest in colour. Although his mature works may not contain the vivid, luminous tints of his early pieces, their loose brushwork and subtlety of tone are without precedent in the history of Western painting.

The exact date of Titian's birth is uncertain. When he was an old man he claimed in a letter to Philip II, King of Spain, to have been born in 1474, but this seems most unlikely. Other writers contemporary to his old age give figures that would equate to birthdates between 1473 and after 1482. Most modern scholars believe a date between 1488 and 1490 is more likely, though his age at death being 99 had been accepted into the 20th century.

He was the son of Gregorio Vecelli and his wife Lucia, of whom little is known. Gregorio was superintendent of the castle of Pieve di Cadore and managed local mines for their owners. Gregorio was also a distinguished councilor and soldier. Many relatives, including Titian's grandfather, were notaries, and the family were well-established in the area, which was ruled by Venice.

At the age of about ten to twelve he and his brother Francesco (who perhaps followed later) were sent to an uncle in Venice to find an apprenticeship with a painter. The minor painter Sebastian Zuccato, whose sons became well-known mosaicists, and who may have been a family friend, arranged for the brothers to enter the studio of the elderly Gentile Bellini, from which they later transferred to that of his brother Giovanni Bellini. At that time the Bellinis, especially Giovanni, were the leading artists in the city. There Titian found a group of young men about his own age, among them Giovanni Palma da Serinalta, Lorenzo Lotto, Sebastiano Luciani, and Giorgio da Castelfranco, nicknamed Giorgione. Francesco Vecellio, his older brother, later became a painter of some note in Venice.

A fresco of Hercules on the Morosini Palace is said to have been one of Titian's earliest works. Others were the Bellini-esque so-called Gypsy Madonna in Vienna, and the Visitation of Mary and Elizabeth (from the convent of S. Andrea), now in the Accademia, Venice.