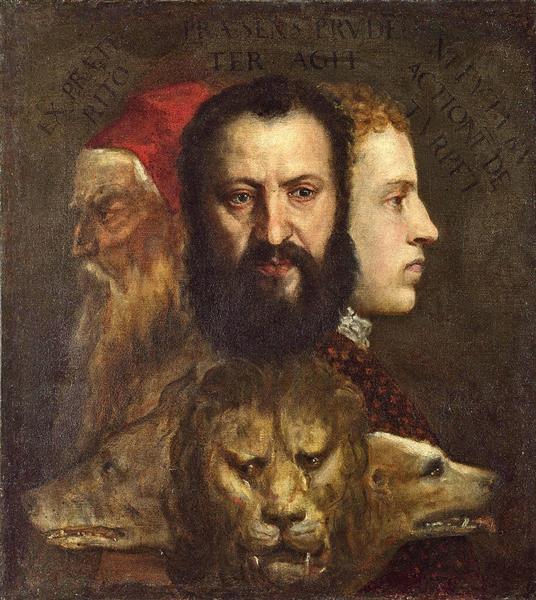 Allegory of Time Governed by Prudence

The Allegory of Prudence (c. 1565–1570) is an oil painting attributed to the Italian artist Titian and his assistants. It is in the National Gallery, London.

The painting portrays three human heads, each facing in a different direction, above three animal heads, depicting (from left) a wolf, a lion and a dog. The painting is usually interpreted as operating on a number of levels. At the first level, the different ages of the three human heads represent the "Three Ages of Man" (youth, maturity, old age). The different directions in which they are facing reflect a second, wider concept of Time itself as having a past, present and future. This theme is repeated in the animal heads which, according to some traditions, are associated with those categories of time. The third level, from which the painting has acquired its present name, is suggested by a barely visible inscription, EX PRAETERITO/PRAESENS PRUDENTER AGIT/NE FUTURA ACTIONẼ DETURPET (“From the experience of the past, the present acts prudently, lest it spoil future actions”).

It may also be that the human faces are actual portraits of the aged Titian, his son Orazio, and a young cousin, Marco Vecellio, who, like Orazio, lived and worked with Titian. Erwin Panofsky, in his classic exposition, suggests that the painting is specifically associated with the negotiations associated with the passing on of Titian’s property to the younger generations, in the light of his approaching death. So, the painting acts as a visual counsel to the three generations to act prudently in the administration of the inheritance. But Nicholas Penny is highly sceptical of this, and points out discrepancies between the human heads and other evidence of the appearance of the individuals. He doubts it was a personal project of any sort and feels that is "surely more likely that the painting was commissioned".

More recently the painting has been explained in quite different ways. Instead of an allegory of prudence, it has been seen as an allegory about sin and penitence. On this view, it amounts to an admission by Titian that his failure to act prudently in his youth and middle age has condemned him to lead a regretful old age.

At the other extreme, the painting has been explained as asserting that the prudence which comes with experience and old age is an essential aspect of artistic discrimination and judgement. On this interpretation, the painting therefore acts as a rebuttal of the view that old age is the enemy of artistic achievement. On a more general level, the painting’s depiction of Titian with his assistants Orazio and Marco is also intended as a defence of the prudence of the continuity of the Venetian workshop tradition.