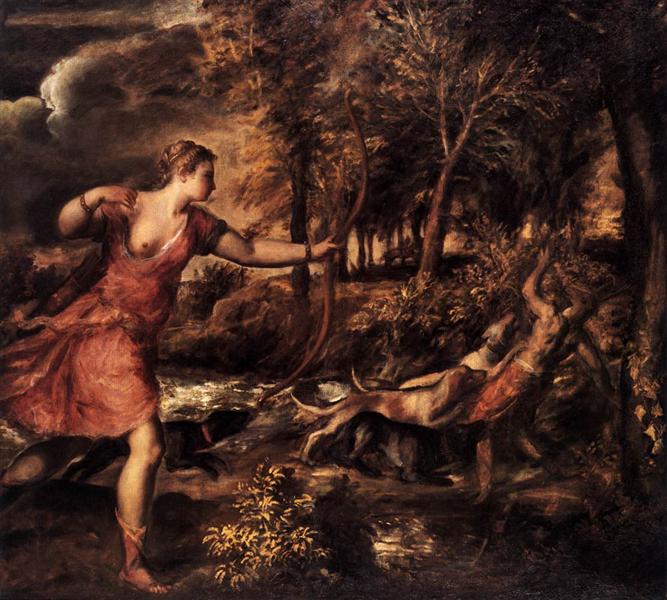 The Death of Actaeon is a late work by the Italian Renaissance painter Titian, painted in oil on canvas from about 1559 to his death in 1576 and now in the National Gallery in London. It is very probably one of the two paintings the artist stated he had started and hopes to finish (one of which he calls "Actaeon mauled by hounds") in a letter to their commissioner Philip II of Spain during June 1559. However, most of Titian's work on this painting possibly dates to the late 1560s, but with touches from the 1570s. Titian seems never to have resolved it to his satisfaction, and the painting apparently remained in his studio until his death in 1576. There has been considerable debate as to whether it is finished or not, as with other very late Titians, such as the Flaying of Marsyas, which unlike this has a signature, perhaps an indication of completion.

It is a sequel of Titian's work Diana and Actaeon showing the story's tragic conclusion, which approximately follows the Roman poet Ovid's account in the Metamorphoses: after Actaeon surprised the goddess Diana bathing naked in the woods, she transformed him into a stag and he was attacked and killed by his own hounds.

Both paintings belong to a group of large-scale mythological paintings inspired by the Metamorphoses and referred to by Titian himself as ‘poesie’, the visual equivalent of poetry, which he began producing for Philip II of Spain in 1551 and which also include Danaë (many versions, Philip's in the Prado, Madrid), Venus and Adonis (private collection, London, but also other versions), Perseus and Andromeda (Wallace Collection, London), The Rape of Europa (Isabella Stewart Gardner Museum, Boston), Diana and Actaeon and Diana and Callisto (shared by National Gallery of Scotland with NG London). However, as The Death of Actaeon was never delivered to Philip, it is not always counted in the series.

Ovid's account does not include Diana herself pursuing Actaeon, or shooting at him, though in some other classical accounts she does chase him. She seems to have just loosed an arrow, but there is no sign of the arrow in the painting, nor is the bowstring visible. The goddess does not have her attribute of the small crescent in her hair that Titian's other two depictions in the poesie do, which troubled one early critic.

There were ancient reliefs and engraved gems showing either Diana hunting with dogs, or Actaeon being attacked by his dogs, and a few Renaissance works, but the subject was rare, and "it may be that Titian had never seen another painting or other representation of the subject."

It was probably still in Titian's studio at his death in 1576, and presumably sold in Venice by his heirs. It probably belonged to the famous Venetian collection of Bartolomeo della Nave, most of which was bought for James Hamilton, 1st Duke of Hamilton (then still a Marquess) in 1636-38, one of the great collectors of the period in Britain. Hamilton's brother-in-law, Basil Feilding, 2nd Earl of Denbigh (as he later became) was English ambassador to Venice, and helped to arrange the purchase. A list of available paintings he sent Hamilton includes "A Diana shooting Adonis in forme of a Hart not quite finished" by Titian.