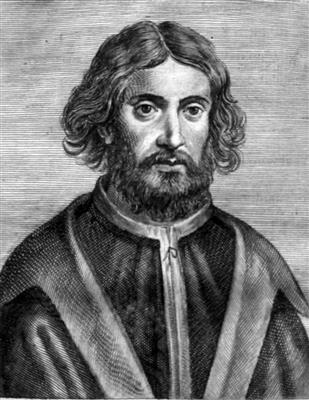 Palma Vecchio (c. 1480 – 30 July 1528), born Jacopo Palma and also known as Jacopo Negretti, was a Venetian painter of the Italian High Renaissance. He was born at Serina Alta near Bergamo, a dependency of the Republic of Venice, but his recorded career all took place in or near Venice. He is called Palma Vecchio in English ("Palma the Elder", in Italian Palma il Vecchio) to distinguish him from Palma il Giovane ("Palma the Younger", 1548/50-1628), his great-nephew, who was also a painter.


Palma is first recorded in Venice in 1510, but had probably already been there for some time. He was perhaps apprenticed to Andrea Previtali, who also came from Bergamo, and who returned there in 1511. Palma's earlier works show the influence of Giovanni Bellini, Previtali's master and by then the aged doyen of Venetian painting, but Palma came to follow the new style and subjects pioneered by Giorgione and Titian. After the deaths of Bellini and Giorgione, and the removal from Venice of Sebastiano del Piombo, Lorenzo Lotto and Previtali, before long Palma found himself, after Titian, the leading painter in Venice, much in demand until his early death at the age of 48 (according to Vasari; his date of birth is calculated from this). His stock has been rising somewhat in recent decades, as more attributions are removed from Giorgione and Titian and given to him; his "sheer painterly capacity" in the handling of paint and colour is extremely fine.


He painted the new pastoral mythologies and half-length portraits, often of idealized beauties who, then as now, were enticingly suspected of being portraits of Venice's famous courtesans. He also painted religious pieces, in particular developing the sacra conversazione (the Virgin and Child with a group of saints and perhaps donors) in a horizontal form with a landscape background. In other, secular, groups something seems to occurring between the figures, though exactly what is unclear. All these types of painting were patronized by wealthy Venetians for their homes.


He also painted traditional vertical altarpieces for churches inside Venice and around the Venetian territories on the mainland. However, he was not commissioned to paint a main altar in Venice until 1525, at Sant'Elena, Venice (now Brera, Milan). He was quick to absorb influences from other parts of Italy, sometimes copying poses from Michelangelo, and taking influence from Central Italy from about 1515 into the 1520s.


Palma's mature work from the 1520s shows a "High Renaissance style, characterized by his mastery of contrapposto, the enrichment of his high-keyed palette and the development of a dignified and diverse repertory of ideal human types in conservative compositions. These qualities dominated his work to the exclusion of dramatic chiaroscuro, spatial experiment, expressionism and innovative composition." Critical opinion is rather divided as whether the art from shortly before his sudden death was continuing to develop, or had lost energy and direction. S.J. Freedburg sees his career as oscillating between the influences of Titian and other north and Central Italian trends, including Mannerism. He had a workshop about which little certain is known, and may have taught Bonifazio Pitati, who he certainly influenced, as he did Giovanni Busi.