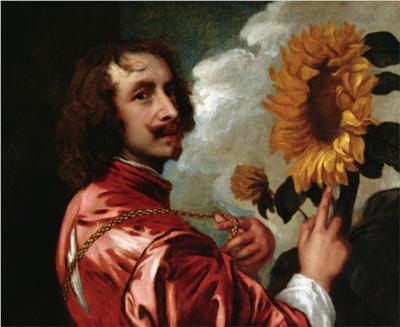 Sir Anthony van Dyck (Dutch pronunciation: [vɑn ˈdɛi̯k], many variant spellings; 22 March 1599 – 9 December 1641) was a Flemish Baroque artist who became the leading court painter in England, after enjoying great success in Italy and the Southern Netherlands. He is most famous for his portraits of Charles I of England and his family and court, painted with a relaxed elegance that was to be the dominant influence on English portrait-painting for the next 150 years. He also painted biblical and mythological subjects, displayed outstanding facility as a draughtsman, and was an important innovator in watercolour and etching. The Van Dyke beard is named after him.

Antoon van Dyck (his Flemish name) was born to prosperous parents in Antwerp. His father was Franz van Dyck, a silk merchant, and his mother was Maria, daughter of Dirk Cupers and Catharina Conincx. He was baptised on 23 March 1599 (as Anthonio). His talent was evident very early, and he was studying painting with Hendrick van Balen by 1609, and became an independent painter around 1615, setting up a workshop with his even younger friend Jan Brueghel the Younger. By the age of fifteen he was already a highly accomplished artist, as his Self-portrait, 1613–14, shows. He was admitted to the Antwerp painters' Guild of Saint Luke as a free master by February 1618. Within a few years he was to be the chief assistant to the dominant master of Antwerp, and the whole of Northern Europe, Peter Paul Rubens, who made much use of sub-contracted artists as well as his own large workshop. His influence on the young artist was immense; Rubens referred to the nineteen-year-old van Dyck as "the best of my pupils".

The origins and exact nature of their relationship are unclear; it has been speculated that van Dyck was a pupil of Rubens from about 1613, as even his early work shows little trace of van Balen's style, but there is no clear evidence for this. At the same time the dominance of Rubens in the relatively small and declining city of Antwerp probably explains why, despite his periodic returns to the city, van Dyck spent most of his career abroad. In 1620, in Rubens's contract for the major commission for the ceiling of the Carolus Borromeuskerk, the Jesuit church at Antwerp (lost to fire in 1718), van Dyck is specified as one of the "discipelen" who was to execute the paintings to Rubens' designs.

In 1620, at the instigation of George Villiers, Marquess of Buckingham, van Dyck went to England for the first time where he worked for King James I of England, receiving £100. It was in London in the collection of the Earl of Arundel that he first saw the work of Titian, whose use of colour and subtle modeling of form would prove transformational, offering a new stylistic language that would enrich the compositional lessons learned from Rubens.

After about four months, he returned to Flanders, but moved on in late 1621 to Italy, where he remained for 6 years, studying the Italian masters and beginning his career as a successful portraitist. He was already presenting himself as a figure of consequence, annoying the rather bohemian Northern artist's colony in Rome, says Giovan Pietro Bellori, by appearing with "the pomp of Zeuxis ... his behaviour was that of a nobleman rather than an ordinary person, and he shone in rich garments; since he was accustomed in the circle of Rubens to noblemen, and being naturally of elevated mind, and anxious to make himself distinguished, he therefore wore—as well as silks—a hat with feathers and brooches, gold chains across his chest, and was accompanied by servants."