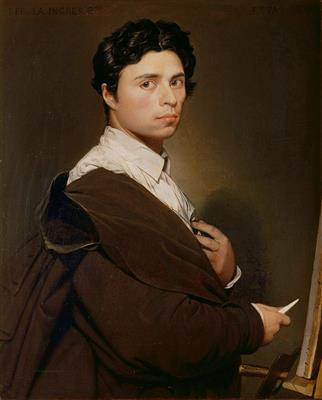 Jean Ingres was a French neoclassical painter, who considered himself the protector of French academic orthodoxy, and fought against the rising popularity of Romanticism. He also considered the leader of the Romantic movement, Eugene Delacroix, his artistic nemesis. Perhaps part of his vehement protection of the classical style of painting had something to do with the early termination of his education. At age 11, the French Revolution began, disrupting his traditional childhood, which became a constant source of insecurity.

As a budding artist, Ingres was able to observe the many examples of famous artworks of Belgium, Holland, and Spain, which had been looted during the exploits of Napoleon, and were held at the Louvre. He freely borrowed from their classical interpretations and used the techniques in his own art, leading to many critics to accuse him of plundering the past. It was in this vein that his first submissions to the Paris Salon were received very poorly. Ingres’ humiliation was so deep that he vowed never to return to Paris. Throughout his early art career, his painting style, which emphasized the purity of color and did not employ the gradual shifting of color and shading as in Romantic paintings, led to many bad reviews. Ironically, it was only the Romantic artists, whom he so hated, that recognized and appreciated Ingres’s talents.

At the end of the Napoleonic empire, Ingres found himself without patronage and penniless. He survived by illustrating drawings for English tourists, many of which rank among his best creations. In 1824, he exhibited his Vow of Louis XIII, which led to his critical acclaim and made him widely popular. Even his earlier works, which had led to his humiliation and disgrace, were held up as masterpieces, and widely distributed. There is a tale that one of Ingres favorite students, Theodore Chasseriau, whom Ingres considered one of his favorite students, upon returning to his teacher after a number of years, showed a tendency toward Romanticism. Ingres quickly disavowed his student and never spoke favorably of him again. His success has led to the legacy of Classicism versus Romanticism, and created the standard to which Classical paintings were held.

Jean-Auguste-Dominique Ingres (French: [ʒɑnoɡyst dominik ɛ̃ɡʁ]; 29 August 1780 – 14 January 1867) was a French Neoclassical painter. Although he considered himself to be a painter of history in the tradition of Nicolas Poussin and Jacques-Louis David, it is Ingres's portraits, both painted and drawn, that are recognized as his greatest legacy.

Ingres was profoundly influenced by past artistic traditions, and aspired to become the guardian of academic orthodoxy against the ascendant Romantic style, exemplified by Eugène Delacroix. His expressive distortions of form and space made him an important precursor of modern art, influencing Picasso, Matisse and other modernists.

Born into a modest family in Montauban, he travelled to Paris to study in the studio of David. In 1802 he made his Salon debut, and won the Prix de Rome for his painting The Ambassadors of Agamemnon in the tent of Achilles. By the time he departed in 1806 for his residency in Rome, his style—revealing his close study of Italian and Flemish Renaissance masters—was fully developed, and would change little for the rest of his life. While working in Rome and subsequently Florence from 1806 to 1824, he regularly sent paintings to the Paris Salon, where they were faulted by critics who found his style bizarre and archaic. He received few commissions during this period for the history paintings he aspired to paint, but was able to support himself and his wife as a portrait painter and draughtsman.

He was finally recognized at the Salon in 1824, when his Raphaelesque painting of the Vow of Louis XIII was met with acclaim, and Ingres was acknowledged as the leader of the Neoclassical school in France. Although the income from commissions for history paintings allowed him to paint fewer portraits, his portrait of Louis-François Bertin marked his next popular success in 1833. The following year, his indignation at the harsh criticism of his ambitious composition The Martyrdom of Saint Symphorian caused him to return to Italy, where he assumed directorship of the French Academy in Rome in 1835. He returned to Paris for good in 1841. In his later years he painted new versions of many of his earlier compositions, a series of designs for stained glass windows, several important portraits of women, and The Turkish Bath, the last of his several Orientalist paintings of the female nude, which he finished at the age of 83.

Ingres was born in Montauban, Tarn-et-Garonne, France, the first of seven children (five of whom survived infancy) of Jean-Marie-Joseph Ingres (1755–1814) and his wife Anne Moulet (1758–1817). His father was a successful jack-of-all-trades in the arts, a painter of miniatures, sculptor, decorative stonemason, and amateur musician; his mother was the nearly illiterate daughter of a master wigmaker. From his father the young Ingres received early encouragement and instruction in drawing and music, and his first known drawing, a study after an antique cast, was made in 1789. Starting in 1786 he attended the local school École des Frères de l'Éducation Chrétienne, but his education was disrupted by the turmoil of the French Revolution, and the closing of the school in 1791 marked the end of his conventional education. The deficiency in his schooling would always remain for him a source of insecurity.