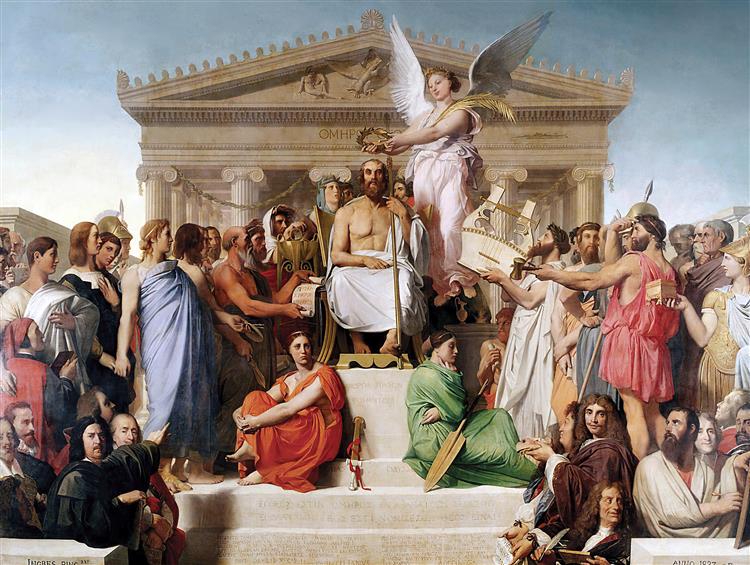 The Apotheosis of Homer

Ingres created this painting by combining over 100 small drawings for the assorted characters, each one making the drawing more detailed and precise. The painting was a state commission by Charles X to have himself remembered in the building works of the Louvre. The painting depicts an image of Homer, receiving all of the brilliant men of Rome, Greece, and contemporary times. The characters in the painting were extensively researched by Ingres, who studied the paintings of Nicholas Poussin, Raphael, and Apelles, the ancient Greek painter. The painting also includes the figures of Dante, Virgil, and Moliere, the French playwright, along with other figures, including Greek and Roman Gods.

The Apotheosis of Homer is a grand 1827 painting by Jean-Auguste-Dominique Ingres, now exhibited at the Louvre as INV 5417. The symmetrical composition depicts Homer being crowned by a winged figure personifying Victory or the Universe. Forty-four additional figures pay homage to the poet in a kind of classical confession of faith.

A state commission to decorate a ceiling of the musée Charles X at the Louvre (now the ancient Egyptian galleries), it formed part of a renovation project commissioned by Charles X to have himself remembered in the grand tradition of Bourbon building works at the Louvre. A condition of the commission was that it was to be completed within a year's time. Upon receiving the commission, Ingres conceived the idea for his painting quickly—it was a source of pride to him that he had required only an hour to establish the broad outlines of his composition. The subsequent care he took in developing his idea is evident in more than 100 drawings and numerous painted sketches for it that survive, in which he can be seen making the composition and the details more and more precise. Ingres's level of research can be seen in the painting's portrait of Nicolas Poussin, which is directly copied from Poussin's 1650 self-portrait now in the Louvre.

The composition is a symmetrical grouping centred in a classical way in front of an ancient Greek temple. The painting's catalogue entry at the time of its first exhibition describes it as "Homer receiving homage from all the great men of Greece, Rome and modern times. The Universe crowns him, Herodotus burns incense. The Iliad and Odyssey sit at his feet."

The final painting's colours are very fresh and clear, giving the impression of fresco. Ingres wished to compete with Raphael through this painting (it is strongly inspired by the Italian artist's Parnassus) and Raphael is to be seen top left (in black and white Renaissance dress), being led by Apelles (in a blue cloak). Other figures shown include Dante who is shown being led by Virgil as in the former's Divine Comedy (extreme left, behind Poussin) and Molière (right, by the feet of the personification of the Odyssey).

The art historian Robert Rosenblum said The Apotheosis of Homer represents "Ingres' most doctrinaire statement of his belief in a hierarchy of timeless values that are based on classical precedent." It is highly successful in its genre, though leaves an impression of coldness, an impression which was reinforced at the time of its production by the exhibition of Delacroix's The Death of Sardanapalus at the same year's Paris Salon. Ingres had been considered revolutionary early in his career, but this contrast now faced off a Romantic renewal under Delacroix against the purest classical tradition as shown by Ingres. The Apotheosis of Homer was taken down from its initial site in 1855 and replaced later that year with a copy by Paul and Raymond Balze (in collaboration with Michel Dumas).

Surrounding Homer are poets, artists, and philosophers both ancient and modern—the modern personages are mostly confined to the lower register of the composition, although Ingres deemed Raphael and Michelangelo worthy of elevation to stand alongside the ancients.