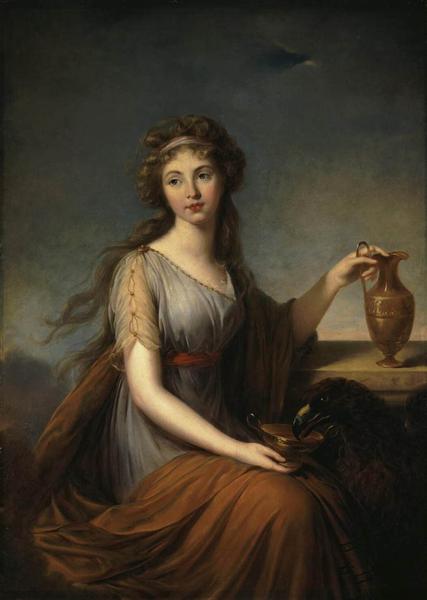 Europeans of the 18th century Age of Enlightenment wanted their artwork and architecture to mirror, and carry the same set of standards, as the idealized works of the Greeks and Romans. In conjunction with the exciting archaeological rediscoveries of Pompeii and Herculaneum in Rome, Neoclassicism arose as artists and architects infused their work with past Greco-Roman ideals. A return to the study of science, history, mathematics, and anatomical correctness abounded, replacing the Rococo vanity culture and court-painting climate that preceded.

Neoclassicism adopted the hierarchy of painting that was established by the French Royal Academy of the Arts in 1669. History painting, which included subjects from the Bible, classical mythology, and history, was ranked as the top category, followed by portraiture, genre painting, landscapes, and still lifes. This hierarchy was used to evaluate works submitted for the Salon or for prizes like the illustrious Prix de Rome and influenced the financial value of works for patrons and collectors. The works of Nicolas Poussin and Claude Lorrain were revered as the ideal exemplars of history painting, and both artists were primary influences upon Neoclassicism. Lorrain's landscapes blended naturalistic detail and the observation of light and its effects, with figures from mythological or Biblical scenes, as seen in his A landscape with Apollo guarding the herds of Admetus (1645). An effect of orderly harmony was conveyed in many of his works, which appealed to Neoclassicism's belief that art should express the ideal virtues. Poussin's compositions emphasized clarity and logic, and his figurative treatments favored strong lines. His The Death of Germanicus (1627) made him famous in his own time and influenced Jacques-Louis David as well as Benjamin West whose The Death of General Wolfe (1770) draws upon the work.

Neoclassicism was inspired by the discovery of ancient Greek and Roman archeological sites and artifacts that became known throughout Europe in popular illustrated reports of various travel expeditions. Scholars such as James Stuart and Nicholas Revett made a systematic effort to catalog and record the past in works like their Antiquities of Athens (1762). Wanting to see these works first hand, young European aristocrats on the Grand Tour, a traditional and educational rite of passage, traveled to Italy "in search of art, culture, and the roots of Western civilization," as cultural critic Matt Gross wrote. Rome with its Roman ruins, Renaissance works, and recently discovered antiquities became a major stop. Famous artists, such as Pompeo Batoni and Antonio Canova, held open studios as many of these aristocratic tourists were both avid collectors and commissioned various works.

Neoclassicism began in Italy, in Rome, as art historian Johann Joachim Winckelmann's Thoughts on the Imitation of Greek Works in Painting and Sculpture (1750) played a leading role in establishing the aesthetic and theory of Neoclassicism. Though German, he lived most of his life in Rome where several notable Catholic officials became his patrons. Arguing that art should strive toward "noble simplicity and calm grandeur," he advocated, "the one way for us to become great, perhaps inimitable, is by imitating the ancients." The work, which made him famous, was widely translated, first into French, then into English by the artist Henry Fuseli in 1765. Winckelmann was the first to create an orderly vision of art, from beginning to maturity to decline, looking at a civilization's art as integrally connected to the culture itself. The book influenced noted intellectuals both of his time and in the following centuries, including Lessing, Herder, Goethe, Nietzsche, and Spengler.

Anton Raphael Mengs, a close friend of Winckelmann, was an early pioneer of Neoclassical painting. The circle of artists that gathered around Mengs and Winckelmann positioned Rome as the center of the new movement. Mengs noted frescoes, depicting mythological subjects led to his being dubbed "the greatest painter of the day." He influenced a number of noted artists, who were to lead the subsequent development of Neoclassicism in Britain, including Benjamin West, Angelica Kauffman, John Flaxman, and Gavin Hamilton. He also influenced Jacques-Louis David, who led the later period of Neoclassicism centered in France, as the two artists met during David's Prix de Rome stay from 1775-1780.

Neoclassicism developed with the Enlightenment also called "The Age of Reason" - a political and philosophical movement that primarily valued science, reason, and exploration. According to its spirit, Neoclassical artists felt art could civilize, reform, and transform society, as society itself was being transformed by the rising forces of the Industrial Revolution, driven by scientific discovery and invention. In Britain, the Neoclassicism of Benjamin West, among other artists, took on a message, emphasizing moral virtue and Enlightenment rationality. Other artists such as Joseph Wright of Derby created works informed by the scientific invention as seen in his An Experiment on a Bird in the Air Pump (1768) or Philosopher Lecturing on the Orrery (1766). Rather than mythological subjects, British artists turned to classical historical accounts or contemporary history like West's The Death of General Wolfe (1770), in which he challenged the academic standards, refusing the advice to depict the soldiers in Roman togas as not based on reason or observation.

The later period of Neoclassicism, centered in France, emphasized strong line, austere classical settings lit with artificial light, and simplified elements to convey moral vigor. Shown at the 1785 Paris Salon, Jacque-Louis David's Oath of the Horatii (1784) exemplified the new direction in Neoclassical painting and made him the leader of the movement. The artist completed the painting while he was in Rome, where he associated with Mengs, and, subsequently, visited the ruins at Herculaneum, an experience that he compared to having cataracts surgically removed. Although Oath of the Horatii appealed to King Louis XVI, whose government had commissioned it, with its emphasis on loyalty, the painting became subsequently identified with the revolutionary movement in France. The French Revolution was a period of far-reaching political and social upheaval that overthrew the monarchy, established a republic, and culminated as a dictatorship under Napoleon inspired by radical new liberalist ideas. The Jacobins, a highly influential political club of the time, adopted the salute of the Horatii brothers as seen in David's The Tennis Court Oath (1791). David's influence was so great that the later period of Neoclassicism was dubbed "the Age of David," as he personally trained artists including Anne Louis Girodet-Trioson, François Gérard, Antoine Jean Gros, and Jean Auguste Dominique Ingres.

The French Jean-Baptiste Pigalle was an early leader of Neoclassical sculpture. His Mercury (1744) was acclaimed by Voltaire as comparable to the best Greek sculpture and widely reproduced. Pigalle was also a noted teacher, as his student Jean-Antoine Houdon, renowned for his portrait busts, subsequently led the movement in France. As the movement was truly international, the Italian sculptor Antonio Canova was considered to be the leading exponent of Neoclassicism as his works were compared in their beauty and grace to those of the ancient Greek sculptor Praxiteles. In England, John Flaxman was the most influential sculptor, known not only for his figures such as his Pastoral Apollo (1824) but his reliefs and his Neoclassical designs for Josiah Wedgwood's Jasperware, an internationally popular stoneware.

Neoclassicism in painting and sculpture began declining with the rise of Romanticism, though in the early 1800s the two styles existed in rivalry, as Ingres held to Neoclassicism, by then considered "traditional," and Delacroix emphasized individual sensibility and feeling. By the 1850s Neoclassicism as a movement had come to an end, though academic artists continued to employ classical styles and subjects throughout most of the 19th century, while opposed and challenged by modern art movements, such as Realism, Naturalism, and Impressionism.

Nonetheless, Ingres' work continued to influence later artists. He impacted Edgar Degas, Auguste Renoir, Henri Matisse, and Pablo Picasso, who were informed by his figurative treatments with their stylistic distortions. David's work, particularly his The Death of Marat (1793), was rediscovered in the mid-19th century, and, subsequently, influenced Picasso and Edvard Munch, as well as contemporary artists such as Vik Muniz. Contemporary artist Cindy Sherman's History Portraits (1988-1990) repurposes a number of famous Neoclassical works through self-portrait film stills.