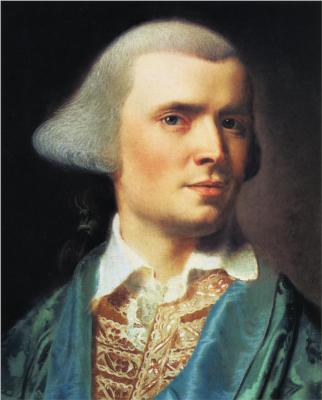 John Singleton Copley RA (1738 – September 9, 1815) was an Anglo-American painter, active in both colonial America and England. He was probably born in Boston, Massachusetts, to Richard and Mary Singleton Copley, both Anglo-Irish. He is famous for his portrait paintings of wealthy and influential figures in colonial New England, depicting in particular middle-class subjects. His portraits were innovative in their tendency to depict artifacts relating to these individuals' lives.

Copley's mother owned a tobacco shop on Long Wharf. The parents, who, according to the artist's granddaughter Martha Babcock Amory, had come to Boston in 1736, were "engaged in trade, like almost all the inhabitants of the North American colonies at that time". His father was from Limerick; his mother, of the Singletons of County Clare, a family of Lancashire origin. Letters from John Singleton, Mrs. Copley's father, are in the Copley-Pelham collection. Richard Copley, described as a tobacconist, is said by several biographers to have arrived in Boston in ill health and to have gone, about the time of John's birth, to the West Indies, where he died. William H. Whitmore gives his death as of 1748, the year of Mrs. Copley's remarriage. James Bernard Cullen says: "Richard Copley was in poor health on his arrival in America and went to the West Indies to improve his failing strength. He died there in 1737." No contemporary evidence has been located for either year.

Except for a family tradition that speaks of his precocity in drawing, nothing is known of Copley's schooling or of the other activities of his boyhood. His letters, the earliest of which is dated September 30, 1762, reveal a fairly well-educated man. He may have been taught various subjects, it is reasonably conjectured, by his future stepfather, who, besides painting portraits and cutting engravings, eked out a living in Boston by teaching dancing and, beginning September 12, 1743, by conducting an "Evening Writing and Arithmetic School", duly advertised. It is certain that the widow Copley was married to Peter Pelham on May 22, 1748, and that at about that time she transferred her tobacco business to his house in Lindall Street (a quieter, more respectable part of town), at which the evening school also continued its sessions. In such a household young Copley may have learned to use the paintbrush and the engraver's tools. Whitmore says plausibly: "Copley at the age of fifteen was able to engrave in mezzotint; his stepfather Pelham, with whom he lived three years, was an excellent engraver and skillful also with the brush." The family lived next to the house occupied by japanner Thomas Johnston and his family, and Copley became friends with Thomas's son William, later to become a painter himself.

The artistic opportunities of the home and town in which Copley grew to manhood should be emphasized because he himself, as well as some of his biographers taking him too literally, have made much of the bleakness of his early surroundings. His son, Lord Lyndhurst, wrote that "he (Copley) was entirely self taught, and never saw a decent picture, with the exception of his own, until he was nearly thirty years of age." Copley himself complained, in a letter to Benjamin West, written November 12, 1766: "In this Country as You rightly observe there is no examples of Art, except what is to [be] met with in a few prints indifferently exicuted, from which it is not possable to learn much." Variants of this thesis are found almost everywhere in his earlier letters. They suggest that, while Copley was industrious and an able executant, he was physically unadventurous and temperamentally inclined toward brooding and self-pity. He could have seen at least a few good paintings and many good prints in the Boston of his youth. The excellence of his own portraits was not accidental or miraculous; it had an academic foundation. A book of Copley's studies of the figure, now at the British Museum, proves that before he was twenty, whether with or without help from a teacher, he was making anatomical drawings with much care and precision. It is likely that through the fortunate associations of a home and workshop in a town which had many craftsmen, he had already learned his trade at an age when the average art student of a later era was only beginning to draw.