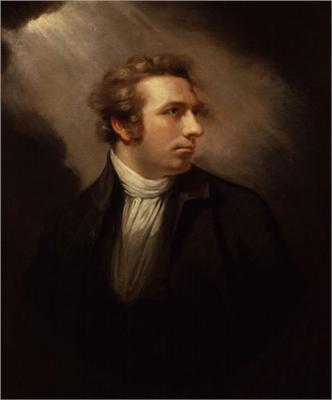 Henry Fuseli RA (German: Johann Heinrich Füssli; 7 February 1741 – 17 April 1825) was a Swiss painter, draughtsman and writer on art who spent much of his life in Britain. Many of his works, such as The Nightmare, deal with supernatural subject-matter. He painted works for John Boydell's Shakespeare Gallery, and created his own "Milton Gallery". He held the posts of Professor of Painting and Keeper at the Royal Academy. His style had a considerable influence on many younger British artists, including William Blake.

Fuseli was born in Zürich, Switzerland, the second of 18 children. His father was Johann Caspar Füssli, a painter of portraits and landscapes, and author of Lives of the Helvetic Painters. He intended Henry for the church, and sent him to the Caroline college of Zurich, where he received an excellent classical education. One of his schoolmates there was Johann Kaspar Lavater, with whom he became close friends.

After taking orders in 1761 Fuseli was forced to leave the country as a result of having helped Lavater to expose an unjust magistrate, whose powerful family sought revenge. He travelled through Germany, and then, in 1765, visited England, where he supported himself for some time by miscellaneous writing. Eventually, he became acquainted with Sir Joshua Reynolds, to whom he showed his drawings. Following Reynolds' advice, he decided to devote himself entirely to art. In 1770 he made an art-pilgrimage to Italy, where he remained until 1778, changing his name from Füssli to the more Italian-sounding Fuseli.

Early in 1779 he returned to Britain, taking in Zürich on his way. In London he found a commission awaiting him from Alderman Boydell, who was then setting up his Shakespeare Gallery. Fuseli painted a number of pieces for Boydell, and published an English edition of Lavater's work on physiognomy. He also gave William Cowper some valuable assistance in preparing a translation of Homer. In 1788 Fuseli married Sophia Rawlins (originally one of his models), and he soon after became an associate of the Royal Academy. The early feminist Mary Wollstonecraft, whose portrait he had painted, planned a trip with him to Paris, and pursued him determinedly, but after Sophia's intervention the Fuselis' door was closed to her forever. Fuseli later said "I hate clever women. They are only troublesome". In 1790 he became a full Academician, presenting Thor Battering the Midgard Serpent as his diploma work. In 1799 Fuseli was appointed professor of painting to the Academy. Four years later he was chosen as Keeper, and resigned his professorship, but resumed it in 1810, continuing to hold both offices until his death. As Keeper, he was succeeded by Henry Thomson.

In 1799 Fuseli exhibited a series of paintings from subjects furnished by the works of John Milton, with a view to forming a Milton gallery comparable to Boydell's Shakespeare gallery. There were 47 Milton paintings, many of them very large, completed at intervals over nine years. The exhibition proved a commercial failure and closed in 1800. In 1805 he brought out an edition of Pilkington's Lives of the Painters, which did little for his reputation.