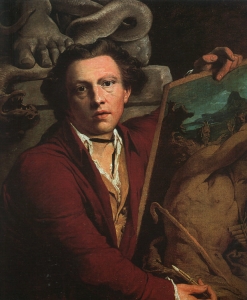 Largely a self-taught artist, Barry in 1763 attracted the patronage of his Irish compatriot Edmund Burke, who funded Barry’s stay in Italy from about 1766 to 1771 to study the Old Masters. Barry then returned to England and rose rapidly in his profession, becoming a member of the Royal Academy in 1773 and obtaining the commission to decorate the Royal Society rooms in 1777. The latter project occupied him until 1783. Barry was professor of painting at the Royal Academy from 1782 to 1799, but he died in poverty.

Barry was an exponent of the “grand style” of Sir Joshua Reynolds; hence, he drew the subject matter for his ambitious figurative compositions from classical antiquity and from literary works. Stylistically, however, his linearity and undulating forms brought him closer to the work of the leaders of the English Neoclassical style, the sculptor John Flaxman and the poet-painter William Blake.

James Barry RA (11 October 1741 – 22 February 1806) was an Irish painter, best remembered for his six-part series of paintings entitled The Progress of Human Culture in the Great Room of the Royal Society of Arts in London. Because of his determination to create art according to his own principles rather than those of his patrons, he is also noted for being one of the earliest romantic painters working in Britain, though as an artist few rated him highly until the fully comprehensive 1983 exhibition at the Tate Gallery led to a reassessment of this "notoriously belligerent personality", who emerges as one of the most important Irish Neoclassical artists. He was also a profound influence on William Blake.

James Barry was born in Water Lane (now Seminary Road) on the northside of Cork, Ireland on 11 October 1741. His father had been a builder, and, at one time of his life, a coasting trader between England and Ireland. Barry actually made several voyages as a boy, but convinced his father to let him study drawing and art. He first studied painting under local artist John Butts. At the schools in Cork to which he was sent he was regarded as a prodigy. About the age of seventeen he first attempted oil painting, and between that and the age of twenty-two, when he first went to Dublin, he produced several large pictures, which decorated his father's house, such as Aeneas escaping with his Family from the Flames of Troy, Susanna and the Elders and Daniel in the Lions' Den".

The painting that first brought him into public notice, and gained him the acquaintance and patronage of Edmund Burke, was founded on an old tradition of the landing of St Patrick on the sea-coast of Cashel, (this is a mistake reproduced from another source, Cashel is an inland town far from the sea) and of the conversion and Baptism of the King of Cashel It was exhibited in London in 1762 or 1763 and rediscovered in the 1980s, in unexhibitable condition.

By the liberality of Burke and his other friends, Barry in the latter part of 1765 was enabled to go abroad. He went first to Paris, then to Rome, where he remained upwards of three years, from Rome to Florence and Bologna, and thence home through Venice. His letters to the Burkes, giving an account of Raphael, Michelangelo, Titian and Leonardo da Vinci, show remarkable insight. Barry painted two pictures while abroad, an Adam and Eve and a Philoctetes.

Soon after his return to England in 1771 he produced his picture of Venus, which was compared to the Galatea of Raphael, the Venus of Titian and the Venus de Medici. In 1773 he exhibited his Jupiter and Juno on Mount Ida. His Death of General Wolfe, in which the British and French soldiers are represented in very primitive costumes, was considered as a falling-off from his great style of art. His fondness for Greek costume was assigned by his admirers as the cause of his reluctance to paint portraits. His failure to go on with a portrait of Edmund Burke which he had begun caused a misunderstanding with his early patron. The difference between them is said to have been widened by Burke's growing intimacy with Sir Joshua Reynolds, and by Barry's jealousy of the fame and fortune of his rival “in a humbler walk of the art.” About the same time he painted a pair of classical subjects, Mercury inventing the lyre, and Narcissus, the last suggested to him by Burke. He also painted a historical picture of Chiron and Achilles, and another of the story of Stratonice, for which last the duke of Richmond gave him a hundred guineas.