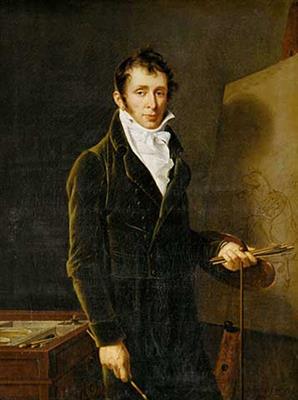 Antoine Charles Horace Vernet aka. Carle Vernet (14 August 1758 – 17 November 1836) was a French painter, the youngest child of Claude Joseph Vernet, and the father of Horace Vernet.


Vernet was born in Bordeaux. At the age of five, he showed an extraordinary passion for drawing horses, but went through the regular academical course as a pupil of his father and of Nicolas-Bernard Lépicié. Strangely, after winning the grand prix (1782), he seemed to lose interest in the profession, and his father had to recall him back from Rome to France to prevent him from entering a monastery.


In his Triumph of Aemilius Paulus, he broke with tradition and drew the horse with the forms he had learnt from nature in stables and riding-schools. His hunting-pieces, races, landscapes, and work as a lithographer were also very popular.


Carle's sister was executed by the guillotine during the Revolution. After this, he gave up art.


When he again began to produce under the French Directory (1795–1799), his style had changed radically. He started drawing in minute detail battles and campaigns to glorify Napoleon. His drawings of Napoleon's Italian campaign won acclaim as did the Battle of Marengo, and for his Morning of Austerlitz Napoleon awarded him the Legion of Honour, and Louis XVIII of France awarded him the Order of Saint Michael. Afterwards he excelled in hunting scenes and depictions of horses.


In addition to being a painter and lithographer, Carle Vernet was an avid horseman. Just days before his death at the age of seventy-eight, he was seen racing as if he were a sprightly young man.


He died in Paris.


In Arthur Conan Doyle's short story "The Adventure of the Greek Interpreter", fictional detective Sherlock Holmes claims that his grandmother is the French artist, Vernet's sister, without stating whether this is Claude Joseph Vernet, Carle Vernet, or Horace Vernet.


In Maria Wirtemberska's novel Malvina, or the Heart's Intuition (1816; English translation 2001, by Ursula Phillips), it is said that a view that is being described merits the talent of Vernet, who as the writer explains in her own footnote was a sea painter.