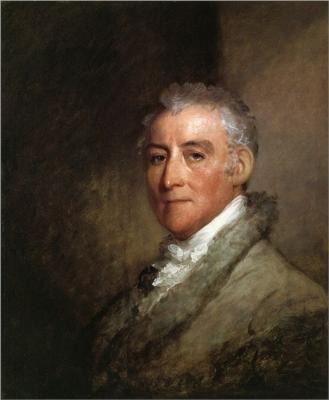 John Trumbull (June 6, 1756 – November 10, 1843) was an American artist during the period of the American Revolutionary War and was notable for his historical paintings. He has been called "The Painter of the Revolution". His Declaration of Independence (1817) was used on the reverse of the commemorative bicentennial two-dollar bill.

Trumbull was born in Lebanon, Connecticut, in 1756, to Jonathan Trumbull and his wife Faith (née Robinson) Trumbull. His father served as Governor of Connecticut from 1769 to 1784. Both sides of his family were descended from early Puritan settlers in the state.

The young Trumbull entered the 1771 junior class at Harvard College at age fifteen and graduated in 1773. Due to a childhood accident, Trumbull lost use of one eye, which may have influenced his detailed painting style.

As a soldier in the American Revolutionary War, Trumbull rendered a particular service at Boston by sketching plans of the British works. He witnessed the Battle of Bunker Hill. He was appointed second personal aide to General George Washington, and in June 1776, deputy adjutant-general to General Horatio Gates. He resigned from the army in 1777 after a dispute over the dating of his officer commission.

In 1780, with funds depleted, Trumbull turned to art as a profession. He traveled to London, where upon introduction from Benjamin Franklin, Trumbull studied under Benjamin West. At West's suggestion, Trumbull painted small pictures of the War of Independence and miniature portraits. He painted about 250 in his lifetime.

On September 23, 1780, British agent Major John André was captured by Continental troops in North America; he was hanged as a spy on October 2, 1780. After news reached Great Britain, outrage flared and Trumbull was arrested, as having been an officer in the Continental Army of similar rank to André. He was imprisoned for seven months in London's Tothill Fields Bridewell.

After being released, Trumbull returned to the United States in a voyage that lasted six months, ending late January 1782. He then joined his brother David in supplying the army stationed at New Windsor, New York during the winter of 1782–83.

In 1784, following the British recognition of the United States' independence, Trumbull returned to London for painting study under West. While working in his studio, Trumbull painted Battle of Bunker Hill and Death of General Montgomery in the Attack on Quebec. Both works are now in the Yale University Art Gallery.

In 1785 Trumbull went to Paris, where he made portrait sketches of French officers for the Surrender of Lord Cornwallis. With the assistance of Thomas Jefferson, serving there as the US minister, Trumbull began Declaration of Independence. Over the next 5 years Trumbull painted small portraits of signers, which he would later use to piece together the larger painting. If the signer was deceased, a previous portrait would be copied, as was the case with Arthur Middleton, whose head position stands out in the painting. While visiting with each signer or their family, Trumbull, always looking for funding, used the occasion to sell subscriptions to engravings that would be produced from his paintings of the American Revolution.