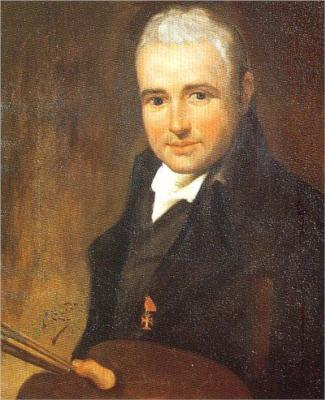 He was born in Belém, Lisbon, into a modest family. He later changed his family name from Espírito Santo to the more aristocratic Sequeira. He studied art first at the academy of Lisbon, before moving to Rome, where he was Antonio Cavallucci`s pupil.

By the age of thirteen, he had evinced such marked talent that F. de Setubal employed him as an assistant in his work for the João Ferreiras Palace. Sequeira resided in Rome from 1788 to 1794, when he was made honorary member of the Academy of St Luke. After another two years and further study in Italy, he returned to his native country with such a great reputation that important commissions for churches and palaces were immediately entrusted to him: scriptural subjects, large historical compositions and cabinet pictures.

In 1802, he was appointed first court painter and, in this role, executed many works for the prince regent, for Dona Maria Teresa, and for members of the court. He designed the valuable silver service which was presented by the Portuguese nation to Wellington, and a monument that was erected in 1820 in the Rossio square at Lisbon. In 1823, he visited Paris where he is known to have tried his skill in lithography and etching. In 1825, he painted the "Death of Camões", which was considered by many to be the first proto-romantic or romantic Portuguese painting.

The last years of his life he spent in Rome, devoting himself chiefly to devotional subjects and to his duties as head of the Portuguese Academy. He saw a Turner exposition in the late 1820s, that served as inspiration for some of his best paintings, like the "Adoração dos Magos" (1828). He died in Rome in 1837.

Among his best-known pictures are the Miracle of Ourique, Prince John Reviewing the Troops at Azumbuja, and The Adoration of the Magi. Numerous paintings by Sequeira are held at the Mafra National Palace, the Ajuda National Palace, and in the principal palaces and churches of Lisbon. The Museu Nacional de Arte Antiga (National Museum of Ancient Art), in Lisbon, has one of the best collections of his paintings.