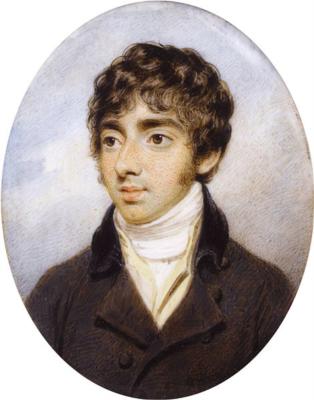 Thomas Girtin (18 February 1775 – 9 November 1802) was an English painter and etcher. A friend and rival of J. M. W. Turner, Girtin played a key role in establishing watercolour as a reputable art form.

Thomas Girtin was born in Southwark, London, the son of a wealthy brushmaker of Huguenot descent. His father died while Thomas was a child, and his mother then married a Mr Vaughan, a pattern-draughtsman. Girtin learnt drawing as a boy (attending classes with Thomas Malton), and was apprenticed to Edward Dayes (1763–1804), a topographical watercolourist. He is believed to have served out his seven-year term, although there are unconfirmed reports of clashes between master and apprentice, and even that Dayes had Girtin imprisoned as a refractory apprentice. Certainly Dayes did not appreciate his pupil's talent, and he was to write dismissively of Girtin after his death.

While a youth, Girtin became friends with J. M. W. Turner and the teenagers were employed to colour prints with watercolours. Girtin exhibited at the Royal Academy from 1794. His architectural and topographical sketches and drawings established his reputation, his use of watercolour for landscapes being such as to give him the credit of having created Romantic watercolour painting. He went on several sketching tours, visiting the north of England, North Wales and the West Country. By 1799, he had acquired influential patrons such as Lady Sutherland, and the art collector Sir George Beaumont. He was the dominant member of the Brothers, a sketching society of professional artists and talented amateurs.

In 1800, Girtin married Mary Ann Borrett, the 16-year-old daughter of a well-to-do City goldsmith, and set up home in St George's Row, Hyde Park, next door to the painter Paul Sandby. By 1801, he was a welcome houseguest at his patrons' country houses such as Harewood House and Mulgrave Castle, and able to charge 20 guineas for a painting, but his health was deteriorating.

In late 1801 to early 1802, he spent five and a half months in Paris, where he painted watercolours and made a series the pencil sketches which he engraved on his return to London. They were published as Twenty Views in Paris and its Environs after his death. In spring and summer 1802, Girtin produced a panorama of London, the "Eidometropolis", 18 feet high and 108 feet in circumference which was exhibited with success that year. It was notable for its naturalistic treatment of urban light and atmosphere. That November, Girtin died in his painting room; the cause was variously reported as asthma or "ossification of the heart."

Girtin's early landscapes are akin to 18th-century topographical sketches, but in later years he developed a bolder, more spacious, romantic style, which had a lasting influence on English painting. The scenery of the north encouraged him to create a new watercolour palette of warm browns, slate greys, indigo and purple. He abandoned the practice of undershadowing in grey wash and then adding pastel patches of colour, in favour of broad washes of strong colour, and experimented with the use of pen, brown ink and varnish to add richer tones. Girtin's early death reportedly caused Turner to remark, "Had Tom Girtin lived I should have starved."